Dhaka, the capital city of Bangladesh is urbanizing fast surpassing many other cities of the developing world.  Tides of migrants and rising population accompanied by unrealistic planning and improper administrative handling helped the city grow spontaneously. The city has taken a haphazard direction to expand in terms of population and areal extent. This unregulated and uncontrolled urbanization of Dhaka is now creating pressure on the city’s water resources, lowering people’s living standards. Scarcity of pure drinking water, polluted surface water, vanishing groundwater reserve, abysmal sanitation, and vulnerability to hydro-hazards have become familiar phenomena to the city residents. The sustainability of the city’s natural and human environment is now under serious threat. The city direly requires integrated and short-term implementable policies to tackle this ever-evolving multi-dimensional crisis.

The frequent presence of skyscrapers in developed cities is going to be the global view in near future. Urbanization is going fast outpacing wars and even natural calamities. By 10 years from now, 60% of the world population will be living in cities (UNDP, 2016).  Today, the Asia-Pacific region holds 17 megacities alone and the number will reach 22 in 2030 (Blum, 2015). While cities have become the engine for economic development, the cost of urbanization is not the same everywhere. Cities growing through unregulated urbanization in developing countries are now the concentration centers of environmental degradation. Water stress is acute in some cities due to increasing population and rapid urbanization (Ray and Shaw, 2019).  In this paper, the focus has been drawn to Dhaka, the fastest-growing megacity of the world, that is on the verge of collapse since reckless urbanization has gone far beyond the carrying capacity of the city. The paper examines how the unprecedented wave of migrants and a rapidly growing population in a wrong urbanization setting has paralyzed the city in terms of water security. Depicting the water-insecure state of the soon becoming dysfunctional megacity, the paper suggests pathways for sustainable urbanization and water security management.

Development activities in today’s world have become synonymous with urbanization. Urbanization is defined as the increased proportion of the urban population (Pacione, 2009). However, the urbanization process in developing countries has a duplex nature of opportunities and challenges (Rana, 2010). To make the positive impacts of urbanization more frequent than its negative impacts, the urbanization process has to be sustainable. Sustainable urbanization is the yardstick to ensure global sustainable development (Camhis, 2006). Addressing urbanization, goal 11 of the SDG (Sustainable Development Goals) aims at “making cities and human settlements inclusive, safe, resilient, and sustainable”(United Nations, 2015, p. 24). While sustainable urbanization will make more environmentally friendly development policies safeguarding the environment and economy altogether, SDG goals separately aim for securing water resources as-“ensuring availability and sustainable management of water and sanitation for all” (United Nations, 2015, p. 20). This signifies the importance of water security in achieving sustainable development. Grey and Sadoff (2007, p. 547) define water security as “the availability of an acceptable quantity and quality of water for health, livelihoods, ecosystems, and production, coupled with an acceptable level of water-related risks to people, environments, and economies”. This definition considered the presence of water as a means of production as well as destruction. This consideration is necessary because concern should be around absence and presence both, not alone on the absence of water.

A conceptual difference exists between megacities and world cities since population size is the determining factor for megacities, not the global function they provide (Yeung, 2009). A city becomes a megacity when it inhabits more than 10 million people. Dhaka is one of the fastest-growing megacities in the world. Dhaka’s transformation from a provincial city to a metropolitan capital dates back to 1971. The city of 1528 square kilometers is located in central Bangladesh, with three major rivers flowing in (The Balu in the east, The Turag in the west, and The Buriganga on the south). Because of its central location, Dhaka megacity is well connected in terms of air, water, road, and rail communications. Dhaka’s speedy economic growth is induced by forces of globalization and capital flow. According to the UN, Dhaka is in the 5th position in terms of the largest megacities of the world with 14.5 million people (Zaman, 2019). With a 4.4% annual growth rate, the city’s population is projected to be 22 million in 2025 (Swapan, et al., 2017).

Increasing in-migration rate, natural increase, and territorial expansion are the three factors responsible for the rapid population growth in Dhaka city (Rahman, et al., 2017). When examining the factors, the failure in administrative planning and handling becomes apparent. Every migration is a function of pull and push factors. Pull factors attract people to migrate to a certain destination, which happens to be Dhaka in the case of Bangladesh. Being the capital it was and still is the center of government attention for literally all the development aspects. Push factors, on the other hand, drive people away from their origin, for example, lack of basic facilities and employment opportunities. Being a victim of “centralization”, other areas except Dhaka are lacking in significant mainstream development, which kills the local’s dream of economic betterment at their home. Every year 300,000 to 400,000 people migrate to the capital for economic purposes (Ahsan, et al., 2014). The high natural increase in population led to overpopulation in Dhaka city. Dhaka is falling apart since the huge burden of the population is exceeding its carrying capacity. UN-Habitat declared Dhaka city as the crowdiest city on earth with over 44,500 people living per square kilometer (McPherson, 2018). This overpopulation is depleting the limited resource base of Dhaka faster, making Dhaka a dysfunctional city. Pollution, congestion, disease spread are some of the notable of the countless adverse effects. Dhaka underwent territorial expansion from time to time which is further linked to in-migration and natural increase. Even after skyrocketing adverse impacts of the rampant urbanization, Dhaka’s issues remained unaddressed in national policies. Local policies for Dhaka failed to get ahead with the rate it was growing. Ambitious planning coupled with lacking coordination and limited public participation made the implementation process harder and even impossible. Now Dhaka is experiencing reckless urbanization, where no certain future of regaining control over it.

Hossain, et al., (2017) in their study considered the sustainability aspects of urban sprawl issues and investigated the “water security syndrome” of Dhaka city. They identified 10 water security impacts that root from uncontrolled urbanization.

The increase of population in Dhaka city is rising the water demand of the inhabitants. DWASA (Dhaka Water Supply and Sewerage Authority) is falling behind to fulfill daily demands (as shown in the figure below). Some areas of the city especially slum areas do not have access to pure drinking water.

Dhaka city is heavily dependent on groundwater with 80% of water usage coming from groundwater storage (Alam, 2018). Over-extraction of groundwater in Dhaka city results from increased population demand and industrial establishments. Dhaka city experienced a 50 meters fall of the water table in the last four decades, many parts of the city now access groundwater at a depth of over 60 meters (Das, 2016). The urban structures also impede the groundwater recharge from rainfall.

Uncontrolled urbanization leads to drainage congestion, lacking storm sewers, and improper maintenance, etc. The combined result of these issues is seen in the forms of waterlogging and subsequent flooding. Particularly slums and squatter settlements of Dhaka city are vulnerable to urban flood due to the accumulation of surface runoff (Rashid, et al., 2007). These hydro-hazards disrupt normal life and damage the infrastructures of the city.

Urbanization and industrialization are polluting the rivers of Dhaka city through the disposal of solid waste and industrial effluents (Dipta and Akhie, 2018). Poor people of slums who do not have access to pure water are often compelled to use the dirty surface water, which causes waterborne diseases. Besides stagnant water in the city becomes the breeding place of mosquitoes, which caused a dengue outbreak last year.

Aquatic systems of Dhaka city are threatened by the increasing level of biochemical substances that result from human and industrial waste dumping (Bashar and Fung, 2020). Research shows that parameters like biological and chemical oxygen demand of Dhaka city rivers are exceeding the prescribed limit of the Department of Environment (as shown in the table below).

Over-extraction of groundwater in Dhaka city can result in earthquakes and land subsidence. Different areas of Dhaka city are already experiencing an annual subsidence level of 2 to 16 mm due to the fall of the water table beneath the soil (Das, 2016).

Decrease of the aesthetic quality of waterbodies:

Pollution, filling-up, and encroachment have reduced the beauty of the water bodies in Dhaka. The appeal for river wind is now fulfilled with sewer fragrance causing nausea instead of providing recreation. 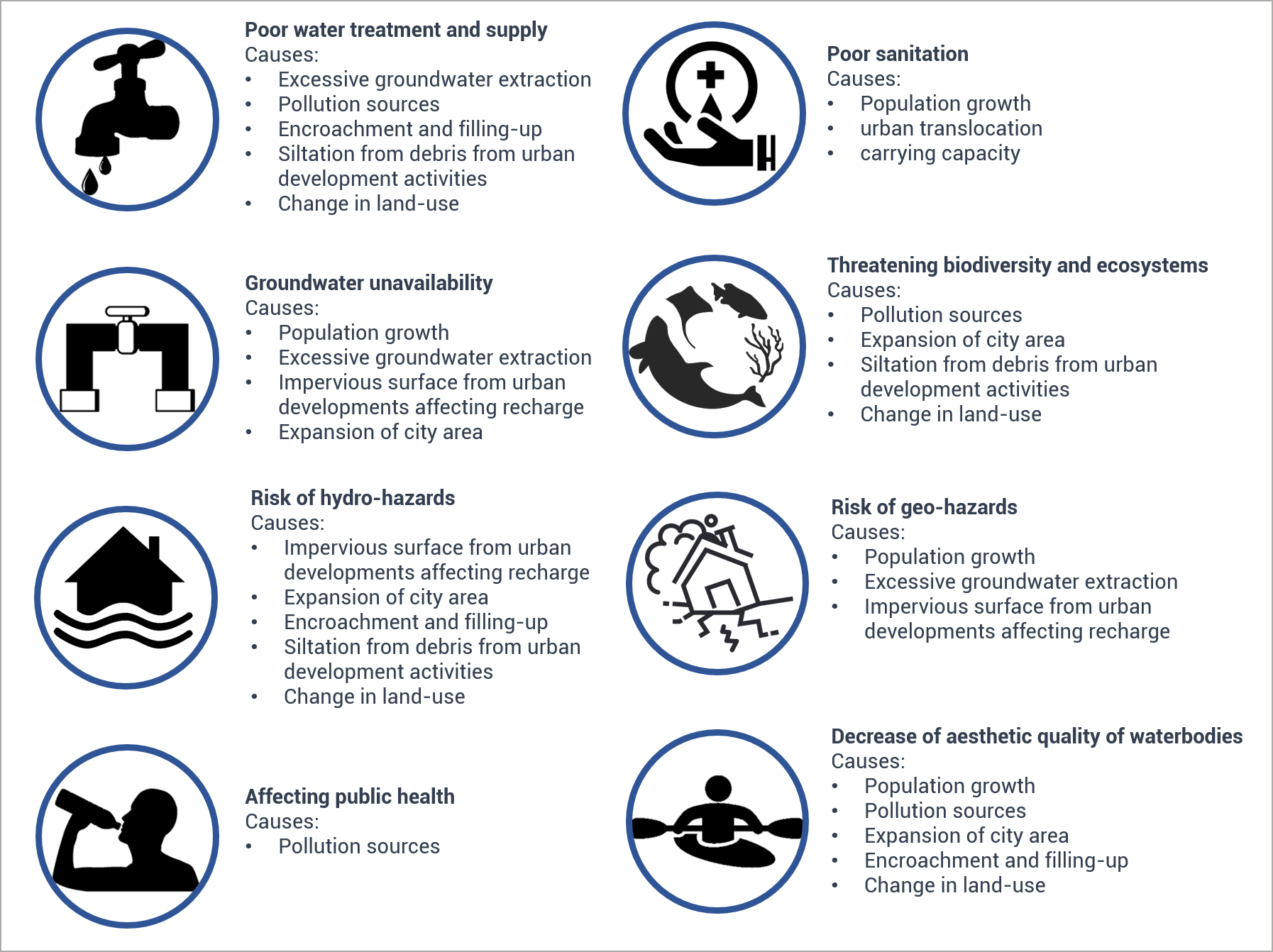 The countries that are going through an uncontrolled urbanizing process and become water-insecure in due course, face a more difficult scenario than ever. These countries are facing a situation burdened with a bigger population and ever-increasing demands. If the uncontrolled urban growth continues, Dhaka might soon turn into an urban slum with lower living standards for the city residents (Pramanik and Stathakis, 2015). It is urgent to ensure that the urbanization process is “working” and urban areas have become safer in terms of environment and economy. Efficient management of urban growth will simultaneously include management of water security issues. But the city’s situation is so vulnerable that water security has to be considered with profound attention and both frameworks should be conducted in coordination.

For sustainable management of urban growth, at first realistic urban plan has to be formulated with sound incentives. The policies have to be effective enough to be implemented within a short period and solving the existing problems (Roy, et al., 2019). Incentives are needed to improve housing addressing homelessness in Dhaka city (Zaman, et al., 2010). Secondly, good governance has to be ensured for the sustainable management of Dhaka city problems. This will involve the decentralization of employment opportunities and services, accountability, coordination among different government departments, and public participation (Rana, 2010). The responsibility of the planning and development activities has to be given to the local government, while the central government provides a master plan and fundings.

For achieving lost water security, the combined use of ground and surface water should be operated. The first surface water treatment plant has been constructed in Saidabad already, more plants with higher capacity should be established. Rainwater harvesting should be initiated. With Dhaka’s 1901.5 mm average annual rainfall if 10% of the city’s land area can be used for harvesting rainwater, we will get 15 billion gallons of water annually (Quayyum and Rahman, 2008). The government can provide incentives to the industries for treating their toxic fluids before discharge. The drainage system has to be updated to prevent waterlogging. Raising awareness against open waste dumping is a must to stop water pollution.

Research made it apparent that rapid urbanization failed in Dhaka megacity to secure its inhabitants in terms of a basic need-water. Policymakers need to remind themselves that once it’s gone, we won’t get back our water. Changing climate and the urban setting will limit the recharge capacity creating waterlogging in the city. Consequences will only be multiplied if actions are not taken to regulate the migration and population growth of the city. Efficient planning along with strong and coordinating administrative handing can make our cities lead in economic growth while ensuring the living standard of the citizens.