(FILES) This file photo taken on July 30, 2017 shows guerrillas of the New People’s Army (NPA) in formation in the Sierra Madre mountain range, located east of Manila.
Philippine President Rodrigo Duterte has ordered the cancellation of peace talks with communist rebels waging one of Asia’s longest insurgencies in a blow to efforts to end a half century-long conflict. Duterte, whose government has been in off-and-on peace talks with the rebels, announced the decision on the night of November 21 as he criticised the insurgents over attacks against his security forces adding he would categorise them as a terrorist group. / AFP PHOTO / Noel CELIS 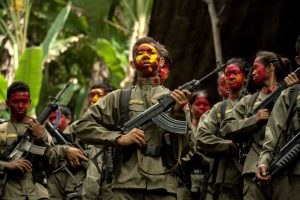