Technology and globalization are often described as complementary aspects to each other. The way we enjoy the prospects delivered by the distinguished complex process which deeply shapes our everyday life, in a sense— from lifestyle to norms, is more or less connected to technocracy. In the field of security studies, it’s well established that whatever environment is subject to discussion, without human security it’s unlikely to coexist with the human domain. In-depth, this human domain itself is an adaptive system that contains collective wholeness namely state function, societal bindings, economic conjugations, political drives, etc. When this domain addresses another non-human domain, still the attributes of human security lead the discussion. Additionally, on a broader scale, the militarization of ‘things’ is sometimes a necessity, sometimes otherwise. However, the militarization of resources has led the course of humankind for years. In a technology surrounded world, the evaluation of warfare is more complex than ever it was. This article is briefly in search of the connection to globalization and warfare with a focused on human-machine interaction.

The term globalization includes vast clusters of discourses within itself. But here for this article’s concern let’s consider this term as a project and process at the same time, which integrates various components and an apparently complex composition entitled into it. As the progress of the 21st century is often addressed as the new millennium and the mass customer-audience is called the millennial; in terms of ‘social interaction, the suggested term is ‘inter-actors’— the group who frequently and spontaneously interacts with the intelligent machines. The interactions drag them into a globalized supranational connectedness and this connectedness within the process of militarization certainly opens a wider view of rethinking the concept of warfare where human-machine interaction plays an interesting role.

AIM AND OBJECTIVES AND KEY ARGUMENTS

In this particular article, the aim is to note some historical events and bring them under critical view of analysis to establish the connection between technological advancement and the nature of warfare. Once the connection is well established, drag them into recent political and grand strategic trends to review the impacts and discuss several features of this globalized connectedness. Nevertheless, here are two specific gazes to the gist of this article which would be broadly discussed. Firstly, whenever something is brought up to the mass consumers as a product, it comes up with positive and negative impacts on the ground. For instance, modern war machines associated with several domains brought by the industry itself have devastating effects and effects on politics, on strategy, and finally on the ‟battlefield‟. Secondly, that might be a defense mechanism or a threat, whatever is a product and relies on great values and prices by means. Based on this standpoint, the key arguments for this article are-

Within the term ‘epistemic’, a specific time frame has its contemporary groundbreaking innovations that demand the transformation of the social-economic-political interaction of a particular demographic and geographic area; and

The impacts introduced by the advanced skill-sets and technological support to the concept of warfare that merges into broader segments. Thus the politics over hegemonic survival automatically creates and expects changes over existing practices.

Globalization is a process of interaction and integration among the people, companies, and governments of different nations, a process driven by international trade and investment and aided by explored knowledge within certain time-frame. This process has effects on the environment, on culture, on political systems, on economic development and prosperity, and on human physical-psychological well-being among societies around the world. Globalization is not new, though. For thousands of years, people—and, later, corporations—have been buying from and selling to each other in lands at great distances, such as through the famed Silk Road across Central Asia that connected China and Europe during the Middle Ages. Likewise, for centuries, people and corporations have invested in enterprises in other countries. In fact, many of the features of the current wave of globalization are similar to those prevailing before the outbreak of the First World War in 1914. But policy and technological developments of the past few decades have spurred increases in cross-border trade, investment, and migration so large that many observers believe the world has entered a qualitatively new phase in its economic development. Since 1950, for example, the volume of world trade has increased by 20 times, and from just 1997 to 1999 flows of foreign investment nearly doubled, from $468 billion to $827 billion. Distinguishing this current wave of globalization from earlier ones, author Thomas Friedman has said that today globalization is “farther, faster, cheaper, and deeper.” Technology has been the other principal driver of globalization. Advances in information technology, in particular, have dramatically transformed economic life. Information technologies have given all sorts of individual economic actors—consumers, investors, businesses—valuable new tools for identifying and pursuing economic opportunities, including faster and more informed analyses of economic trends around the world, easy transfers of assets, and collaboration with far-flung partners. Globalization is deeply controversial, however. Proponents of globalization argue that it allows poor countries and their citizens to develop economically and raise their standards of living, while opponents of globalization claim that the creation of an unfettered international free market has benefited multinational corporations in the developed world at the expense of local enterprises, local cultures, and common people. Resistance to globalization, although at low scale—has therefore taken shape both at a popular and at a governmental level as people and governments try to manage the flow of capital, labor, goods, and ideas that constitute the current wave of globalization.

CONNECTEDNESS WITHIN THE ROLE OF TECHNOLOGY

This part of this article is to seek attention to some specific historic eras and compare the features of the time frame then. The features namely state system, economic system, communication system, a major war, and the means and methods of the wars. Briefly, in the European context the periods that would be discussed are The Dark Age, The Renaissance, The Age of Exploration, the Invention of photography and the radio, and computational military wings.

Economy: breaking down the house-hold business into merchandization, concept of state capital boosted;

State system: princedoms, monarchies and oligarchies or the republics;

State system: monarchies and oligarchies or the republics, colonialism, imperialism;

Major war: around the world among colonial powers;

After invention of radio transmission sending messages had the major breakthrough. Time consumption during transmission in comparison with human networked transmission decreased dramatically. The connectedness dragged the globe in a virtual concept of a village. Military communication developed. Warfare changed with in a grade of revolution.

Another major breakthrough is computational messaging system; coding and pre-programmed machines to encrypt message increased the possibilities to transform the tactics and strategies. Along with easy transmission process, the conduct, contact changed the concept of information during war and also during peace time. Commercialization of computational machines at the same time boosted economy and the potential possibilities to conflict. Gradually and eventually in the context of new millenniums the technology of transmission even reached to the concept of quantum communication.

Recognizing the involvement of itself intelligent machines into the war machines with interaction of human agents and non-human agents as well, now-a-days the decision maker in the standard ‘situation room’ is not an individual anymore rather it could be considered as a team work around the table continuously engaging with bunch of operators and sometimes engagement of actual on ground tactical agents (human and non-human). “Humans rely on their fast intuitive decision making capabilities in many situations but, when decisions are complex and the stakes are high, a slower, more distributive process based on decision theory decision analysis is worth using instead, such a process does not try to predict or mimic intuitive human decision making instead decomposes complex problems into their component parts. So as to take actions based on normative engineering principles.”[1] Nonetheless, the decomposition of problem solving pattern of thinking and translating these thinking into actions are more or less collaboratively deliberate with three patterns which are critical, creative and strategic thinking. To co-relate these three patterns, one creative system must adapt one critical system to sustain unnecessary instability in a controlled phase; the joint system must adapt a strategic system and for clarification, a strategic system must go through a critical system to have enough evolutionary creativity to be placed into. Again any thinking pattern is closely relevant with human memory system. “Human memory is a powerful pattern matcher, capable of finding information from prior experiences that are analogous to the current experience and also human memory is reconstructive.”[2] These reconstructions based on experiences; process the information in different subsets and different temporal duration such as working memories, long term memories and short term memories. Considering these as layer of memories, the working memory is the outer layer of memories continuously engaged with real time inputs of information and rapid pattern matching, at the same time with analogical metaphorical extrapolation of past events. Short term memories are those information—stored relatively by new sets of events based on experience comparatively less repeated as thus high possibility to ‘forget’ or ‘disguised’ re-cognition. On the other hand long term memories are those information which are more repeated constructions throughout experiencing continuous learning process, learned, practiced, exercised that even in subconscious state the layer works as it supposed to do. For instance, not everyone is a soldier, not every soldier is to perform a particular task. For example, a tactical human agent who is on an active mission, aware of his/her means’ class, location of his/her target, communicating with his/her team and commander, indeed s/he is a multi-tasking individual who is in continuous engagement with previously discussed three layers of memories and his/her multitasking ability is a learned skill. The same skill set indeed a need for those who are in strategic ‘situation room’, though the actions might be different. Now to simplify the understanding of a hypothetically standard ‘situation room’, from (figure: Diagram) SR is the local access point to a C2 (command and control). Remember it is not a conventional warfare but a non-conventional warfare and a tactical module M1 is operating in a different location on/above/under surface. Let’s consider M1 has only one human individual H carrying an itself intelligent device D. For D, the perception of its environment E1 is based on its degrees 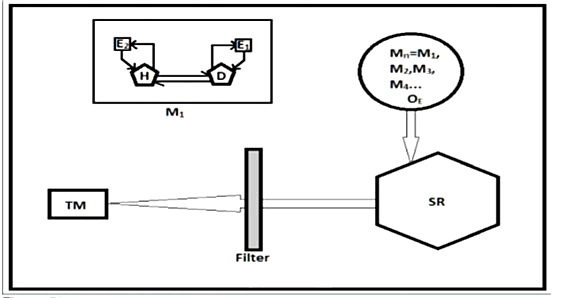 of freedom. For agent H the perception of environment E2 is based on his/her thinking patterns and memory layers. H and D are engaged with continuous interaction and have particular complementary objectives. Now consider the operational team OE with its environment and particular objective but with shared goal. Additionally, OE contains several modular human-machine agents M1, M2, M3, M4… Let’s say some of them are in different location but reporting to SR. Receiving all the reports, being filtered by politics and laws, verified by different strategies, authorized by different levels, SR commands a particular strike to tactical team TM.

So far, after having attention to the ‘innovation and impact’ and describing the military dependency and hypothetic situation room; no doubt the 21st century is facing a new kind of warzone that is physical and non-physical at the same time. The connectedness offered by the globalization and the real scale real time changes which are going on to the several theaters are closely interconnected although the connection seems blurry. Lastly, Based on the arguments produced by this article, it’s not about to judge and decide whether the impacts on several dimensions of warfare are having good or not good vibes instead of categorizing them into strong catalyst or weak catalysts during the transforming period of the globalization. Nevertheless, whether strong or weak, the relationship between warfare and welfare remains the subject to another magnified discussion.

Archive, Militarization of the economy and science: the birthplace of the metropolitan technocracy, United Nations University Website. Retrieved from

5 Replies to “An Evaluation To Globalized Warfare”