Abstract: Security discourse is one of the major ingredients of any international event. The Corona or COVID-19 case is also not disentangled from security perspectives. Moreover, it has brought unprecedented security paradox to the global security regime. In this article, we tried to demonstrate the security implications of the COVID-19 case with a critical point of view. The study depicts significant dynamics of shifting notions from traditional security practice.

The world is facing an unprecedented emergency situation of COVID-19 pandemics. All the sectors of modern statehood are under “Quarantine” tackling the virus. Trade-business is shocked, the flow of people is limited. Countries from the global north to the south are panicked. Even the state persons are not left secured though they are surrounded by the elite security guards! The situation brings out several questions regarding security discourse. Are the world secured actually despite the development of traditional security apparatus? Do sophisticated arms ensure total security? If not, to what extent a state should spread its military? These questions make us reconsider the pre-existing approaches to security policy. In this article, we are going to analyze the future dynamics of security policy experiencing COVID-19 pandemics. We will explore the challenges and questions the situations left in the security arena.

Since the inception of security as a means of statehood, we have witnessed a dynamic nature of security study over time. Several events triggered this shift. For example, the pathetic experience of World War I & II changed the security policy of countries (Japan), the end of the cold war restructured the global security arena (termination of the bi-polar arms race), the 9/11 twin tower attack is the recent tectonic event that brings changes to previous security preferences (global war on terror). Now, we are having such an event that is pushing the world to rethink the existing security apparatus, remake substantive philosophical and empirical framework.

Understanding security perspectives need fulfilling several questions like what the security really is, security for whom, and what are the issues related to security. The philosophy of security has three schools: the first version associates security as alleviation of threat, the second version advocates the accumulation of power, and the third version signifies broader emancipation. Emancipation illustrates the idea of “survival-plus” which means security is more than a narrow focus on survival or alleviation of threat. Such illustration reflected in the Barry Buzan (2008), he reemphasized the importance of holistic security rather than confining in military force. It poses a sense of confidence. This view argues that it is not particular commodities (such as nuclear weapons) that are the crucial factor in understanding the security-insecurity equation but the relationship between the actors concerned. The COVID-19 situation reopens the door to such a claim. In the situation, there is no doubt about the threat and the victims. But the ambiguity remains over today’s complex world, how to resolve the menace in such complexity. The situation can be identified as a new security paradox. States know their enemy but they are helpless to resolve. They have guns, missiles, submarine, nuclear weapons but they are toothless against a micro-virus! We may be entered into a new global security sphere!

First, the State’s contribution to traditional security expenditure should be reconsidered. The reconsideration should be balanced by the situation of health, education, human development, food, environment; economy, etc. Global military expenditure has been increasing since 2000.  Some of the regions tend to expend more on the military than others. For example, South Asia is one of the most expending regions in the military. The motivation comes from several determinants like domestic politics and politics of securitization. India and Pakistan, politicians of the two countries use securitization policy as a domestic political toolkit pointing each other. And such military expenditure decreases the health budget significantly. As a result, those countries have to face the worst suffering in such a pandemic. Now, it’s time to rethink the security policy experiencing the COVID-19 havoc. 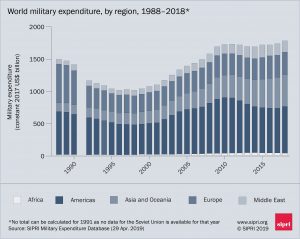 The region’s expenses more on military (for example South Asia and the Middle East) are highly vulnerable to COVID-19 implications in terms of health security, economic security, energy security, and food security. The demographic pattern and social practice are favorable to spreading the virus (India, Pakistan and Bangladesh), the political economy would deter the domestic condition (for example India, Pakistan, and Bangladesh are highly dependent on remittance. Any disruption on migration flow will break the economy and society), and the political dilemma of handling the turmoil worsens the condition (Iran, China). From such experience, the policy analyst should reconsider to what extent of expenditure on the military makes sense.

Second, a conspiracy theory mounted on “bio-terrorism/bio-weapon” revolving COVID-19 case. Some of the cases relate to biological weapons like Anthrax, Botulism, Ebola, Plague, Small Pox, etc. Controversy rounds pointing China’s earlier response to the COVID-19 situation trying to hide the information of the virus. The counter-opinion also rejects it pointing the case as the trade-war implication from the US. Chinese govt. also claimed the COVID-19 as a US conspiracy. Though it’s not a time to debate on the issue rather than tackling the situation, we can say that the future security policymakers must consider that the probability of the use of bio-weapon cannot be misread. Prevention is better than the cure will be a good choice for countries. Especially, the countries aren’t involved in power politics will be innocent victims of such projection.

Third, the COVID-19 experience ignites the hidden message from nature. Significant environmental changes have been seen. Interestingly, the global tragedy of COVID-19 indicates the prospect of a solution to another tragedy of commons- global climate change. GIS images of NASA says a significant reduction of emission of carbon to the atmosphere. The European Space Agency report depicts the reduction of greenhouse gas emissions in Europe, Italy, and China during the COVID-19 situation. It’s the consequence of shutting down industries, the lockdown of cities; it won’t resolve the global climate change situation permanently. But, the message is that we can adapt to the situation if we take it seriously. Global climate security is not less important than a pandemic; it’s a global security concern. The cases of habitual changes during COVID-19 situations can be considered in future policy analyses to reduce greenhouse emissions. It indicates that an innovative solution through adaptation is yet remaining; a systematic alteration can bring huge improvement.

Conclusion: Innovative and Holistic Approach should be Initiated

In a nutshell, we can say that the COVID- 19 situation is a turning point of the global security regime. Once peeping “globalization of insecurity” is scowling now! We already have known the constraint between globalization and politics. And it’s such a situation the world is fighting against an unknown enemy. But the known side is that “normal” is not always normal if we wink at upcoming alarm! We were fluctuated to grab materialistic security and development, hasn’t it led to such an abnormal situation? How long should we stuck with the politics of securitization be a question? The implication demonstrates the inefficiency of the “one size fits for all” security model. It also constitutes the need for planetary, prudent, and holistic security approaches in upcoming days; the future security philosophy should be disseminated through the “security for all” policy. We cannot deny that states are not ready to abolish the military-security apparatus right now, but we must recalculate traditional military expenditure. The area of security umbrella should be extended globally with an innovative and all-inclusive security blueprint.