The perspective of Political Globalization

When we talk about globalization, we can’t define it particularly because of its multidimensional aspect. Scholars defined it in various ways. Shortly, globalization can be defined as the intensification of social relations, exchange of cultures and compression of distance. Globalization can be defined by one’s own point of view. An economist can define it through global flow of capital and extension of market. A musician can define it as hybridization of culture and a politician can define it as increase of interdependence of states.

In today’s world, states are more related with each other than ever because of cumulative business and trade. Thus, politics are also not excluded from globalization. Day by day, states are being involved more in international contexts. In the pricing of foreign exchange, states are less supreme than ever. The ideas of political structure are being developed day by day. States are now morally bounded by international norms and regulations. For sake of state’s own interest, state herself is bound to bilateral and multilateral forums. In such circumstance, heated debate arises surrounding globalization is that does globalization limits state sovereignty? Are states no longer actors in global politics? Where does the “power” lies actually when states are more bounded with each other?

The debate on political globalization and nation-state

It is important to have a simple definition of nation state. Basically the nation state is defined as a country with particular population, recognized territory, de facto government and sovereignty. According to Elmer social science dictionary, a nation-state is Modern state in which a government has sovereign power within a defined territorial area, and the mass of the population are citizens. The core debate appears from the “sovereignty” which assumed to be integral part of a nation state. In general discussion, state is the prime actor in global political discussion. State has exclusive control over its territory and domestic affairs. It entitles states to the practice of sovereignty. On this context, hyper globalists claim that today’s states are much different from the previous one. Today’s political structure is borderless in nature, particularly in economic perspective. They argue that economy is the mainstream road to achieve state interest and state has declined its actual border through neoliberal economy.

On the other hand, skeptics say that today’s state relation is as same as previous one. States are inter-related but have supreme authority over its borders and domestic affairs. They also argue that today’s world is not “globalized” but “internationalized”. Their point of view is that economical cumulating is not actually political globalization. There are some other theorists also like complex globalization thesis, new institutional thesis, and ideological thesis etc.

The institutional theory is based on global governance like UN. They believe that global could be better solved by international organization. By the discussion, someone says that the increasing activities of International Organizations are threat for nation-state.

So, before having a conclusion we would like to have some characteristics of today’s world. 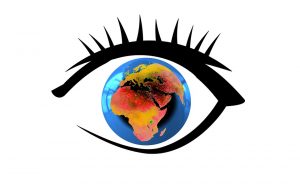 The blurriness of domestic and international issues

If you think about to live a country without having treat of climate change while most of the countries have concern about it, it’s quite ridiculous. Even if you look forward to combat terrorism alone it won’t be possible. Such way, the blurriness of domestic and international issues accelerates political globalization. As a result, the need of multilateral forum has increased. For example, UK’s exit from BREXIT has become a matter of concern from many countries for their business and trade.

Depletion of sovereignty by situational complexity

After the experience of devastating World War, the world intensely felt the need of common rules and regulation. Then president of US Woodrow Winlson enacted 14 points which results the birth of international institution. Now, United Nations has passed a long journey with success in some aspects like social development. Global trade and business has increased rapidly in last half of the 20th century. Consequently, international financial organization like WTO and IMF has been emerged. States has become interdependent in such a way that EU has become an important actor in global politics. ASEAN has become a major trade body in global economy. In such circumstance, a single state can’t initiate any policy without considering regional and global perspective. So, it limits the state sovereignty.

The post cold war US lead world system has seems to be declining. Other major powers have been emerging with responsive flow. Today’s political structure is more multi-polar than ever. The military and strategic alliance are seems to be dynamic more. In last century, many states emerged separating from mother state. Liberal democracy has been taken by states. “Arab Spring” has flowed through MENA region. Myanmar is on the way to democracy after long struggle. Now, states are more concern for international norms and laws.

Increase of regionalism in various patterns

Regional entities are more active in current politics. ASEAN, EU, OPEC and such supra national authorities are more vibrant in today’s politics. For, example EU sends its representative like diplomatic corps in countries. ASEAN stands for its political and economic interest of East Asian countries in global forum.

So, does globalization decline of nation state?

The nation-state can be described by the following attributes- territory, population and a government being able to have jurisdiction over territory and population and finally recognition from other states. A nation-state is therefore a territorial entity in control of several functions over a population being seen as authority from other states. It’s a critical question whether the globalization declining the nation state. As globalization is a reality, state is practicing limited but adequate sovereign authority. Though state is the prime actor in international relation and international politics it can’t escape from global complexity of interdependence. I would like to say that today’s world is under transformation. The increasing stalks of global economy results the spread of MNCs, IO has also become a not-state but important part of global politics. But national interest is top priority for states till now.

read article on One Belt One Road by China