Climate change is one of the central challenges of our era and increasingly acknowledged as a public health urgency. There is some prominent evidence that proves global climate change will have aggressive effects on human health, especially among the deprived communities of developing countries like Bangladesh. Being one of the hotspots for climate change, Bangladesh is experiencing some acute disasters because of its characteristic climatic conditions, its geographical location, as well as its high population density and underprivileged health infrastructure. The health sector currently does not have sufficient funding, acceptable infrastructure, manageable human resource capacity, logistics or the amenities that are required to adequately address the climate change impact on our health.

read more The Impact of Technology on Healthcare

The many dangers that come with Flooding

A Change in the climate and the water cycle does not only challenge water availability but also increases the exposure to unsafe and contaminated water, which is a major risk factor for outbreaks of water-borne diseases. Floods, droughts, heavy storms, changes in rain patterns and sea levels, they all show a growing trend worldwide and affect physical, chemical and biological mechanisms of water through diverse ways, thus enhancing the threats of waterborne diseases.Apart from the deaths from drowning, flooding causes wide-ranging indirect health effects which also include impacts on water supply, food production and manufacturing, bio-network distraction, infectious disease outburst and vector spreading. Long-term effects of flooding may include post-traumatic anxiety, mental sickness, and population displacement.
Under a high emissions scenario, it has been predicted that by 2030, 4.2 million additional people may be at risk of river floods annually due to climate change.

Some of the world’s most virulent infections are also exceedingly sensitive to climate.  Temperature, humidity, and precipitation have a strong effect on the life-cycles of the vectors and the infectious carriers. These agents carry and play a vital role in the transmission of water and food-borne diseases. Malaria is one of the most noticeable vector-borne diseases. 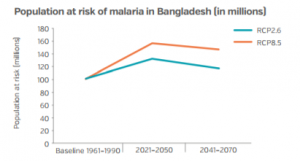 Under a high emissions scenario, over 147 million people are projected to be under threat of malaria by 2070.

Dengue
Many countries that have under-privileged health systems & face substantial challenges of disease avoidance & control are the hotspots of a dengue epidemic.

The mean relative vectorial capacity for dengue fever is predicted to remain at a relatively high endemic transmission level towards 2070. Co-factors such as industrialization, urbanization and population bursts may modify the disease burdens associated with dengue, and worsen the situation by making the disease cross new subnational boundaries.

Climate change is expected to increase mortality in association with hot and cold weather in both rural & urban cities. Increasing mean annual temperature and the force & frequency of heat waves result in a superior number of people at risk of heat-related medical conditions. Particularly children, elderly, the terminally ill, the socially insulated and at risk working groups are vulnerable to heat-related threats. 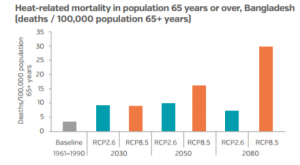 Climate change, through land and water scarcity, increasing temperatures, flooding, drought, and dislocation have negative impacts on agricultural production and cause the severe breakdown in food systems. These disproportionally affect those who are most vulnerable to hunger and can lead to food insecurity. These vulnerable communities suffer further deterioration into malnutrition catastrophes if exposed to extreme weather events. Climate change is also expected to simultaneously lower grain yields and raises crop expenses across the developing and under-developed world. It has been projected that the risk of hunger and malnutrition could increase globally by up to 20 percent by 2050 without considerable and acceptable efforts made to improve climate resilience.

Various co-factors like extreme temperatures, floods, erratic rainfall, drought, tropical calamities, exposure to rising sea levels, saltwater intrusion and oceanic acidification are causing serious negative impacts on the lives and livelihoods of millions of people in Bangladesh, and are gradually deteriorating the noteworthy socio-economic development gained over the past 30 years, as well as jeopardizing future financial stability.. But Bangladesh is working ambitiously to achieve resilient development as much as possible. With this in mind, the countries’ national climate plan or INDC aims to put onward mitigation and adaptation actions that Bangladesh can take to tackle its growing vulnerabilities and play its role in global efforts to make a sustainable living place for future generations.