South Asia is a rich, diverse, and vibrant region that is home to about one-fourth of the world’s population. Having ethnic, cultural, and historical linkages, this region is one of the most densely populated geographical areas of the world. Owing to its crucial strategic importance in terms of connectivity with West Asia and the Pacific Ocean to the east, this region is strategically vital for trade and water resources. However, this region is also one of the least integrated regions in the world, marred with issues such as poverty, poor illiteracy rates, chronic environmental problems, border disputes, and the influx of violent jihadi terrorism.

The vested interests of major powers like China contribute to sustained regional tension and make this region even more fragile. India, being the largest country in this region, in terms of economy, geography, and military capabilities is seeing growing Chinese involvement as a threat to its national security objectives. This article will provide a detailed analysis of the Indian sphere of influence and how it is being challenged by China. Elucidating the diverse nature of Chinese engagements in the South Asian region, this article will also analyze how growing Chinese influence will shape the geopolitical landscape of this region.

India, being the largest country in the region seems to be a regional power by default. This region is the most vital and proximate geopolitical space for India. Thus, it is no surprise that, in defining one’s vital national and security interests, a country’s neighborhood enjoys a place of unquestioned primacy. India has a set of bilateral relationships with all the countries in South Asia, varying in political and economic intensity.

India and Afghanistan share a strategic partnership agreement. Though the relationship has changed irrevocably after the takeover by the Islamic nationalist Taliban. India has been involved in various infrastructure projects like the Parliament building in Kabul, Zaranj Delaram Highway, and Salma Dam (Afghan- India Friendship Dam). Apart from infrastructural development, India has also provided military and administrative cooperation, amplified people-to-people contact, and work towards social development.

India and Bangladesh share a special relationship. Their ties are ‘special’ and ‘unique’, not comparable with other countries, says Indian Foreign Secretary Harsh Vardhan Shringla. Apart

from sharing many cultural ties, both countries are common members of SAARC, BIMSTEC, Asia Pacific Trade Agreement (APTA) IORA, South Asian Free Trade Area (SAFTA), and the Commonwealth. Though there have been areas of contention like border killings, land and maritime disputes, and cross-border terrorism, the two countries have cooperated substantially in areas of security and border management, defense cooperation, connectivity, economy, commercial trade, development, and cultural cooperation.

India and Nepal share a warm diplomatic relationship with cultural and religious linkages, even today there is no Indian who distrusts a Nepalese. Though the China factor has changed this harmonious relationship, the two countries have established cooperation in the energy sector, and connectivity projects, including road, railway, and inland waterways. There is discontent in Nepal that India does not complete the development projects on time, so India must address these weaknesses on account of the growing Chinese influence in Nepal.

India and Pakistan relations are strewn with the boulders of history. The relationship between the two nuclear powers of South Asia has been marred by various border disputes and other security issues. The Pakistani support for insurgencies in Kashmir, infiltration of terrorism into India, and various attacks like the Indian Parliament Attack (2001), Samjhauta Express bombings (2007), Mumbai Attacks (2008), and the recent Pulwama Attack (2019) have overshadowed their relationship. Though there have been many high-level talks and confidence-building measures like the Shimla Summit, Agra Summit, and Lahore Summit, no long-term prospects seem visible for the two nations.

The relationship between India and Sri Lanka is more than 2500 years old and is built on the strong foundation of shared cultural and socio-economic heritage. The two countries cooperate in areas such as development, social services, health, agriculture, fisheries, infrastructure, trade, and commerce. The fishing disputes, the Sinhala issue, and the Chinese involvement pose some major challenges for Indo- Sri Lanka relations.

The regional dissonance and internal instability of South Asia have enabled foreign players to interfere and influence regional politics. China is one such major player that has expanded its economic, political, and cultural footprint in South Asia at an unprecedented rate. The growing presence of China in this region has also created tensions. Beijing is rapidly expanding its activities in the region through vaccine diplomacy, people-to-people engagements, economic projects such as Belt and Road Initiative (BRI), Regional Comprehensive Economic Partnership (RCEP), and other bilateral economic agreements.

China is the biggest trading partner in goods for Bangladesh and Sri Lanka, and the second-largest for Nepal and Maldives. In Afghanistan, the CCP’s primary interest is to secure militant extremism to seep into Xinjiang. Also, in 2014, the CCP pledged 330 million dollars in aid to Afghan President Ghani.

Nepal has recently turned to China for investment and CCP has pledged connectivity projects, such as the Trans-Himalayan Corridor which is estimated to cost over 5 billion dollars. This project will include a rail link between Tibet and Kathmandu and provide an alternative route, thereby side-lining India. Elucidating on China’s “Three Supports” for Nepal, Chinese Foreign Minister Wang Yi said, China supports Nepal a) in blazing a development path suited to its national conditions; b) in pursuing independent domestic and foreign policies and c) in participating in Belt and Road cooperation to a greater extent.

Endorsing its flagship connectivity project BRI, China has expanded its influence in the region. From the Hambantota project to the China-Pakistan Economic Corridor (CPEC) to the Trans-Himalayan Corridor, the BRI in South Asia is the most visible example of the CCP’s attempt to expand its economic activity and influence in the region. Other BRI projects include the Gwadar port, Diamer-Bhasha Dam, Peshawar-Karachi motorway project, and Peshawar-Karachi (ML-1) railway line in Pakistan; tunnel road between Kathmandu- Kerung in Nepal; Port City Colombo, Colombo South Harbour in Sri Lanka and Dhaka-Chattogram Rail Route in Bangladesh. 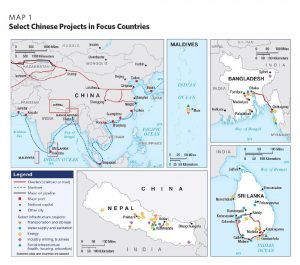 Apart from infrastructure projects, China has used soft power to increase its influence in the region. The setting of Confucian institutes, promoting Mandarin, and giving scholarships to meritorious students from BRI countries are all examples of the same. Pakistan hosts five Confucius Institutes and two Confucius classrooms and Pakistan has the 3rd highest number of international students studying in China. The CCP’s Xinhua News Agency also launched an Urdu-language paper in January 2020, supposedly to counter negative news about CPEC projects. The International Department of the Chinese Communist Party (CCP) has diligently built associations with political parties in South Asia. It has organized virtual seminars and workshops with members of the ruling parties in Nepal and Sri Lanka to discuss the relationship and avenues of cooperation between the parties.

These tactics applied by China in South Asia aim towards expanding its influence in the region and also to check the rise of India. Manoj Joshi from the Observer Research Foundation in New Delhi says, “When Chinese spend money in places like Nepal and Pakistan these are basically strategic actions, not necessarily economic ones.” Only the future will tell if Chinese economic policies will bring a boon to South Asian nations or drive them into debt.

The countries that constitute South Asia are bound by religious, linguistic, and ethnic ties. Envisaging a depiction of kith and kin, Lakshman Kadirgamar refers to these countries as the “sisters of South Asia”. The Colombo Declaration at the 10th SAARC Summit in 1998 remarks that the people of this region are “heirs to a profound common civilizational continuum of great antiquity which constitutes a historical basis for sustaining harmonious relations among the people of the region”. The South Asian nations must recognize that they need to work together as a bloc and groupings such as SAARC, BIMSTEC, and BBIN must be reinvigorated. As a regional power, India must take the lead in pursuing infrastructure projects and policies aimed at economic and regional integration.

Due to India’s cultural, historical, social, and political connections with these countries, there’s a limit to how deeply entrenched China can become. However, this limit is being tested as China continues to boost its economic clout. The South Asian nations must cautiously and comprehensively frame their future trajectories in wake of growing Chinese influence. They must recognize that South Asia’s stability can have long-lasting importance for world politics and must work together in a shared pursuit of collective prosperity.

Riya Shah is currently in her final year of her bachelor’s in Chinese at Jawaharlal Nehru University, New Delhi. She is passionate about conducting extensive, multi-domain China-focused research. Her areas of research interest include international relations, Chinese foreign policy, and the geopolitics of the East Asian region.