The US secretary of the state has just visited Bangladesh and appraised US – Bangladesh relation in more deliberately. On the ending moment of Obama’s period, it became more dimentional geopolitical, strategical question why Bangladesh is important to US. In this article we would like to describe ins and out of the dimensions. 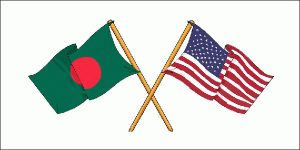 Looking back to the history, in Bangladesh’s independence struggle, US policy was not supportive to Banglaseh. It was then geopolitical situation. There are some perspective of cold war, SIETO protocol with Pakistan 1953 regarding security. Once Henry Kissinger, then president of US stated Bangladesh as “Bottomless Basket”.

We are now thinking about present time. In 2016 Bangladesh became a geopoliltical factor in world politics. As Bangladesh is the largest contributor to RMG sector, Bangladesh’s contribution in RMG export is about 25$ annually. Besides it’s reputation to empower women by RMG is allurable. Bangladehs has tramandous reputation in UN peacekeeping operation as more than 7000 trops are deployed in about 10 UN misson. Bangladsh’s GDP growth of 6% is likely attracted US for economic interest. Above all, Bangladesh’s geographical position is a matter in US – Bangladesh relations.

If we assess John Kerry’s visite we may find three asepects in this  regard. First, security strategy against terrorism. It’s permanent policy of US against terrorism particularly against IS. In this regard Bangladesh is important to US. Because Bangladesh has faced some incident recently. Thus US want to exchange the information by law enforcement agencies. John Kerry already their desire of collaboration against terrorism

Second one is economic and investment interest. US imports a number of garments. Besides US can check it’s economic relations through WTO in Bangladesh. In 2014 US investment in Bangladesh was appromaximately 656$ million which was 12% increase rate of previous year. Bangladesh is an important market of US machinery and infrustructural tool like agricultural produsts, medical instrument, aircraft, engine, building equipment etc. in 2014 US exported about 1.1 $ billion. There are several trade agreement like TICFA (Trade and Investment Coperation Frame Agreement) and billatural agreement.

Finally, politicla anf geopolitical interest is very crucial point in US – Bangladesh relaions. As promoting democracy is US buzzword through the world, it’s policy to Bangladesh is same. At present Bangladesh is also struggling for democracy. Geopolitically Bangladesh has easy access ot Indian Ocean is important for US. It’s apparent that ocean is the apple of discord in 21st century’s politics. US, China, India are the three point on this triangle. So, it’s very clear why Bangladesh is important to bangladesh. Rather Bangladesh has common border with India and Myanmar.

In foreign policy, there are no permanent enemy or friends. The eternal actor is national interest. Bangladeh is also playing the role “more friends, fewer enemies”. Bngladesh is also maintaining very diplomatic role having relations with US, Russia, China, India simultaneously. Time will say, what will be the effect of US – Bangladesh relationship