The whole world is being experienced with various kinds of ‘ism’ emerging with their distinctive views, but the purpose of theses ‘ism’ has been difficult to be marked with certain motto to protect humanity. Still these isms are being approached towards our upcoming future. Are these isms congenial to humanism?

Fundamentalism, fascism, colonialism, terrorism, capitalism, Marxism, racism, globalism, humanism and what’s more have grasped the entire world. Among these, the ism and activities of IS has now-a-days been a burning question. IS, The Islamic State, also known as the Islamic State of Iraq and al-Sham (ISIS), follows a distinctive variety of Islam whose beliefs about the path to the Day of Judgment matter to its strategy, and can help the West know its enemy and predict its behavior. Its rise to power is less like the triumph of the Muslim Brotherhood in Egypt (a group whose leaders the Islamic State considers apostates) than like the realization of a dystopian alternate reality in which David Koresh or Jim Jones survived to wield absolute power over not just a few hundred people, but some 8 million. Although in many ways IS is simply extending and intensifying the ideology of other jihadist groups such as al-Qaeda, it differs markedly in terms of its desire and ability to govern the territory its controls. Whereas other jihadist groups are concerned almost solely with staging disruptive attacks, IS combines these tactics with an effort to provide social services, including religious lectures, road repair, and maintaining the electricity supply. Despite its brutal violence IS has gained a measure of support in northern Iraq due to the alienation of Sunni population from the Shia dominated government in Baghdad. Moreover, it has been terrifying around the whole world killing innocent people to expose its power and to control the world through its own principle. Now a question arises that is IS favorable to humanism? 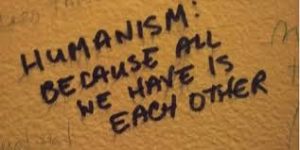 Conversely, today the manifesto of election in different countries is being implemented on the basis of these isms as well. The election of United States of America is the blaring example. Donald Trump, pro-republican candidate, has unanimously announced that if  his party can win in the upcoming election, he will exterminate Muslim from the USA. According to him The Muslim are the roots of all kinds of terrorism. Again, the question is can the eradication of Muslims be able to bring peace and protect humanism? Lately before election several Bangladeshi Muslim expatriates named Alauddin Akonjee, 55, imam of Al-Furqan Jame Mosque in Ozone Park, and his associate Tara Uddin, 64 and Nazma Khanam, 60, have been stabbed to death.

Besides, the Kashmir conflict has been a top topic in context of these.  Another article on Kashmir issue The administrations of both India and Pakistan are strict to their own doctrine. But the people of the region have been suffering from their basic needs. The demand of the general people there was understandable, but how could India create another Muslim country on its border when it already has had a bad experience of having one Islamic state, Pakistan? They shrugged their shoulders when argument about it was raised at the Lok Sabha, with a majority behind Prime Minister Narendra Modi. The quantum of autonomy can be a matter of debate but certainly not the accession. By going back to the very raison of Pakistan, they would start another kind of a debate and might disturb the equanimity which Hindus and Muslims have achieved despite an unequal situation. Now the question is what situation might not disturb humanity?

In search of the answer of the above mentioned questions, a few queries keep demand for its reply, “is the world for mankind or mankind for the world?” What is worth having all isms if humanity is neglected? What if all isms are neglected through protecting humanism? We are expecting answer from you on the basis of humanism rather then realism!