Rohingya are the minority people of the West Rakhine province of Myanmar. Rakhine State is situated on the western coast of Burma. One third of the Rakhine state’s peoples are Rohingya. There are about 8 million Rohingya in Myanmar but the government of Myanmar doesn’t recognize them as citizens of Myanmar. There are 3 kinds of citizens in Myanmar’s constitution: citizen, associate citizen and nutralized citizen according to 1982 citizenship law. Rohingya are considered none of them though there are enough evidence in history that they are native people of the state. 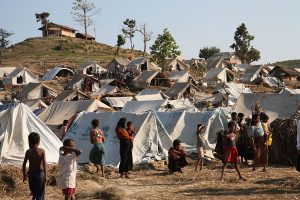 There are 135 recognized minor peolple in Myanmar but Rohingya havn’t recognized yet. The government of Myanamr claims that Rohynga are migrant from Bangladesh and India. They claim that Rohyngia are not native of Myanmar. In Myanmar neither they have single rights of Myanmar citizen nor as migrant. They can’t enter in public service, can’t move freely. Even they have to take permission of authority to marry! See video documentary

If we look over history we see that about 7th to 8th history Rohingya tribal appeared in hybride of Arakani, Rakhine, Bengali and Indian. Gradually they established separate province in arakan during 15th to 18th century. History says they had a good community in Rakhine state even there are a number of Rohingya in Arakan royal court.

The Rohingya problem begun when Arakan was attaked by Burmese in 1824. When Burmese people captured the power of Arkan Muslim people scattered. This sudden flow of immigration declined the co-existing relation between Rakhaine Buddhist and Muslims. In World World II when Japanese expentionist invaded the Myanmar they let the Rakhine Buddhist to confront against Muslim forces. Situation deteriorated when Ne Win took power of Myanmar in 1962. In 1972 he commenced “Oeration Dragon” as to cleansing of Rohingya. More than 2 million Rohingya migrated to Bangladesh in 1978. There are 13 refugee camp established for Rohingya in Bangladesh by UNHCR (United Nations High Comissioner for Refugee). 1,87,250 Rohingya refugees pushed backed by diplomatic negotion. In 1991 Mog and Rakhine again started to oppress Rohingya. Abut 2 million Rohingya migrated to Bangladesh. In 2012 another violent happened left 160 people’s lives and thousand of Rohingya had to leave their home. They have to live in confined camp forcibly still now. Addtionally, the discrimination with Myanmar is contributing influx of refugee & migrant. In 2014 thousands of Rohingya left their lives in Andaman sea fleeing to Malaisia, Thailand, Indonesia and Singapore.

After 50 years of military regime Myanmar is on the ground of democracy now. Military ruler used Rohingya issue for their political interest, spreaded propaganda over there. But now it seems to resolve the problem as new government party Nationla League for Democracy (NDL) has campaigned for liberal justification. As Aung San Suu Kyi is a Nobel Laureate in Peace. But the beginnig was not so positive as we have seen.

Myanmar is a rumor driven society and anti-Muslim propaganda is ofter used for political rhetoric. As Buddhist protester showed sign to UN, IO and INGO representative not to enter to help Rohingya before and This makes it more difficult for these INGOs, as well as local NGOs, to deliver humanitarian aid to those in Rakhine state. But it’s a great news now that an Advisory Comission has made in 24th August 2016 to resolve the problem in leading with renowned diplomat formar UN Secretary General and Nobel laureate Kofi Anan.

It’s an optimistic sigh in Rohingya issue in Myanmar that at least present government is keeping an eye to the problem. The comission has considered to find the dact, reconcilliate and propose sustainable resolution. They have been given year for the program. The international members of the commission are Ghassan Salamé, a scholar from Lebanon and former advisor to Kofi Annan, and Laetitia van den Assum, a diplomat from the Netherlands and a former advisor to the United Nations Program on HIV and AIDS. The other six members are Myanmar nationals, with two Rakhine Buddhist members, two Muslim members, and two government representatives. It’s positive sign of formation of the committee from distinguished sides.

It’s become more inprtant when several political party (Arakan National Party and the Union Solidarity and Development Party)  are protesting to betray the committee that it should reconcilliate now. National League for Democracy (NLD) is also nore more different from them. They don’t want to take responsibility as they consider it as sensitive issue. Besides the nomenclature of the identity is another crucial point that the comission will has to face. Because there had been long debate of naming Rohingya as “Rhingya” or “Bangeli Muslim” or any other term. UN Secretary General Ban Ki Moon called them as “Rohingya”. Another challenge waiting for Kofi Annan’s comission that it don’t has enforcement power. Though there are members from both home and international community it has to make a valuable and feasible solution to mitigate tension.

To the international community sometimes the situation is described as Rohingyas to the legal and humanitarian aspects, editorialists around the world have taken an easy approach towards a complicated issue… where issues like ethnicity, history, and cultural identity are key ingredients of legitimacy

But the metter is more conflict than we think. We wish another succesful resolution by Kofi Anann in Twenty first Century and we should be optimistic on Aung San Suu Kyi.