At the time of 15th anniversary of 9/11 tragedy we are trying to find “true fact” over the incredible incident what is considered as game changing incident of international system. Nonetheless, US then president George W Bush’s “terrorism for terror” has done an untold suffering for civilians. Innocent children, women are the worst victims. If we look back to whole incident till upcoming US election politics we can easily reveal the real example of “narcissism”.

Still now the world wide top topic is American narcissism and the tragedy of 9/11 which sometimes storms in a cup of tea among the generals as the whole world is being directly or indirectly affected by these. Therefore, these should be scrutinized to make free the world from the impact of the narcissism and 9/11.

As to American narcissism one cannot deny that Donald Trump’s haughty expression, braggadocio and narcissistic comments continue to impress more than 40 percent of the American electorate. This is not insinuating that all of Trump’s followers are narcissistic. But there has been a noticeable increase in traits such as materialism, low empathy, egocentric self-view and selfish disregard for others among the general population. It appears that the future lies in the hands of people who can shout the loudest, brag in the most shameful ways and have very little compassion for the less fortunate and those who choose to maintain a semblance of modesty. Such braggadocio and narcissistic comments were also noticed in George W. Bush, former president of USA, which might be caused to the horrible 9/11 tragic. 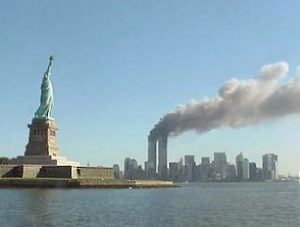 Now let me explain the term ‘narcissism’. Actually the term ‘narcissism’ has been derived from the Greek myth of Narcissus who fell in love with his own image reflected in a pool of water. There are two versions of the story, but they essentially have the same ending – when Narcissus realized that the image was his own, he lost his will to live. He kept staring at his reflection until he died. The term “narcissism” is now used to mean “the pursuit of gratification from vanity or egotistic admiration of one’s own attributes and the myth of Narcissus and the dangers of living a life where all that counts is “me”.

Consequently, a social encounter with a narcissistic personality can be emotionally draining. These people are not only self-absorbed, but they love giving theatrical performances that demand your attention. The one thing they all have in common is an utter lack of empathy. They live in a cocoon believing that the world revolves around only them. So is ostensible amongst most of the American political leaders.

For what the tragedy might have happened though many intelligentsias and experts have opined from their intelligences and views. For example, To reveal the mystery what really happened on that day (9/11), A joint New York Times and CBS poll expresses, 84 percent of Americans do not believe the official 9/11 story (Truth and lies: Conspiracy theories are running rampant thanks to modern technology, The Independent, November 11, 2011). The official story that has been presented to the public simply does not seem to add up.

Even prior to its release, on April 28, 2016, the London-based Saudi daily Al-Hayat published an article written by Saudi legal expert Katib Al-Shammari, arguing that “The US itself had planned and carried out the 9/11 attacks, placing the blame on a shifting series of others — first Al-Qaeda and the Taliban, then Saddam Hussein’s regime in Iraq, and now Saudi Arabia” (Article In Saudi Daily: US Planned, Carried Out 9/11 Attacks — But Blames Others For Them, Middle East Media Research Institute, May 19, 2016).

In response, The New York Times in an editorial on May 27, 2016, wrote that “Saudi Arabia has frustrated American policy makers for years”. As according to the editorial, the Saudis have sponsored “extremist clerics” who are “fostering violent jihad”, creating a “fertile ground for recruitment to radical ideology”. Other western media outlets have since tied Saudi funding to what had happened on 9/11. Now the question is, why after all these years, is the US turning on its close ally, blaming it for parts of what had happened?