A thought beyond state, a simple belief of person, an ideology except which human being cannot be proper, regarding history, we know that is religion. Religion and fundamentalism are two side of same coin. That means they are interrelated. Pre-modern age, it was quite impossible to find out atheism with an institutional recognition. On this basis, the slogan of secularism is relatively new. It is thought that religion is the way to be successful by maintain some rules and norms in personal, social and national life. Here the concept of nationalism became a famous ideology during the closing decade of 18th century in the French Revolution. That revolution, for the first time, engaged people within a certain territorial boundary rather than a classical national concept of language, religion or ethnicity. In that period, religion became backward in the context of combined attainment. If we consider the evolution of human society from ancient Greek age, we found the Greek maintained religious life with certain values. Also from Roman Empire, in territorial expansion like war, religious concepts were followed. These two examples shows that the religion was developed coincidence with human society, meaning inter-connected to each other. 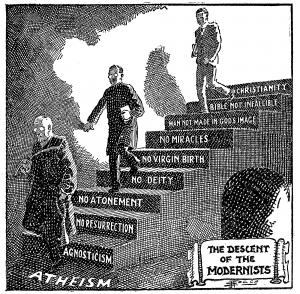 The age of “Renaissance”, when we were at the beginning of modern age, society was transformed in the hands of some people who were the forerunner of a society where religion was regarded as drawback for development. Those people proclaimed, development only comes when personal exertion and enterprise are the basis of any area rather than blessing of God. In this sense, inner feelings and common beliefs about religion of people was in fallout greatly. The result was that a secular society was growing with the sense of material development. A point is necessary to show that secularism strongly emphasizes on human rights although everything on this ideology is market based and making a sense of production and sell. So someone may ask what is the standard of human rights on secularism, the answer is, most of the human rights concepts are taken from different religions, is secularism an ideology free from religious belief? Or a propaganda may listen that people may perform their religion within secularism, isn’t it contradictory? Where religion has certain values to perform and secularism wants to shape those values. Actually here I want to specify a relation that fundamentalism and secularism are also inter-related. Fundamentalism means some basic points of any matter. According to this, secularism has some fundamental norms to operate it, and those who are secular also fundamentalists like those of religious fundamentalists. Fundamentalism is not a bad idea although the way of describing it is bad. The world order after the collapse of Socialism in Soviet Union, turned to a new shape where religion became a fruitful weapon to grasp others and consume power and resources among states. Especially Islam was in basic target and till now, on favor of my statement you can understand background of the wars in Middle East from the closing decade of 20th century to present. Weapon business of leading super power, monopolistic authority over oil turns a formidable future for next generation in that region day by day. The impact of such propaganda is also dangerous for all of us. History tells one nation can climb up as supreme for highest 100 year, as Ibn Khaldun remark. So we need to understand that oppressing a nation by others in the name of religion (so called fundamentalism as perverted use), cannot progress to a healthy and peacefully world.