China- Bangladesh have moved ahead steadily in spite of profound changes in the domestic politics of both countries and major international developments during the last three decades. China has emerged as a reliable partner to Bangladesh Extending economic, military and diplomatic support. While simultaneously attempting to gain a strategic foothold in south Asia and benefit from Bangladesh’s natural resources. The recent visit of Chinese President to Bangladesh made it apex of the history of Bangladesh-China bilateral relation ever seen. Now the relation between Bangladesh is not only fact in bilateral relation but also in international politics more specifically in geopolitics. Chinese President Xi Jinping quoted to intense “strategic partnership”. Let’s have a brief dynamics of Bangladesh- China relations.

Brief history: china and Bangladesh established diplomatic relations on 4- October 1975. With though 1974 Bangladesh- Pakistan- India treaty, China finally withdraw its opposition to UN recognition of Bangladesh. It was only after Sk. Mujib’s assassination in 1975. That China recognized Bangladesh. In 2002, the BNP led four party coalition government adopted a “look East policy” to maximize economic and strategic gains. While this shift in policy was primarily aimed at trade diversification   Bangladesh also sought closer relations with China.

To assess the relation between Bangladesh and China we firs have to look over economic relation as Bangladesh is 3rd largest trading partner of China. Let’s have a look to the chart.

According to ‘the Daily Star’ famous newspaper in Bangladesh, the trade between Bangladesh and China reached about USD 12.5 billion.[1]Despite healthy trade between the two countries, there exists a huge trade surplus in Chinese favor during the Bangladesh foreign secretary visit to Beijing. On 19- April 2006 both countries agreed to take steps to reduce this gap. At present, under the Bangkok Agreement China provides duty free access to 84 Bangladeshi products, though Dhaka is pushing for a complete opening of the Chinese market for its products in order to reduce the trade imbalance. China-Bangladesh trade volume reached a record high of 10.3 billion US dollars with a growth rate of 21.9% compared with 2012, 10 times that of 2002.

In 2005, Chinese Prime Minister Win Jiabao visited Bangladesh. Various agreements were signed during this visit. On transportation side, China and Bangladesh have agreed to start ….. Inaugurating direct Air route between Dhaka and Beijing via Kunming. The Chinese premier readily agreed to construct the Di-aluminum phosphate, Fertilizer factory in Chittagong. (In 2007) 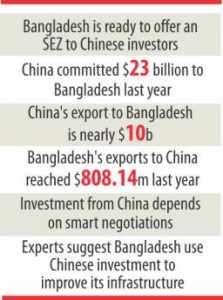 BCIM economic corridor: China and South Asian countries appear to be keen to revive the ancient route and forge it into a robust economic corridor for trade and investment.  This route, otherwise known as the BCIM route (Bangladesh, China, India and Myanmar) was reportedly discussed with Indian leaders during Chinese Premier Li Keqiang’s India visit in May 2013. With joint efforts by China, India, Myanmar and Bangladesh, a highway route starting from Yunnan to India by way of Myanmar has been reportedly approved in principle by the relevant departments of the four countries. The joint statement issued at the end of Keqiang’s visit to India said that encouraged by the successful BCIM Car Rally of February 2013 between Kolkata and Kunming, the two sides had agreed to consult the other parties to establish a Joint Study Group on strengthening connectivity in the BCIM region for closer economic, trade, and people-to-people linkages, and to initiate the development of a BCIM Economic Corridor.

During the Bangladesh liberation war in 1971, China supported Pakistan. It was a political policy of then period. After independence Bangladesh was close to India and the Soviet Union. In 1972 China exercised its veto power as a permanent member of the UN Security Council to block Bangladesh’s entry into the UN. After the assassination of Sheikh Mujibur Rahman, Bangladesh began distancing the country from the Indo-Soviet cold war axis. Diplomatic relations with China were established in 1976. In 1977, Ziaur Rahman made an official visit to the Peoples Republic of China. Vice presiden Li Xiannian was the first Chinese state leader viited Bangladesh first on 1978. Then Ziaur Rahman visited China again in 1980 and made bilateral agreement on Loan and Aviation Transport. By the mid 1980’s China had forced close commercial and cultural ties with Bangladesh.

Consequently the relation between Bangladesh and China developed day by day in Ershad Period. Ershad paid 5 visits to China during his 9 years period.

During the Khaleda Zia or Sk Hasina period the status quo were remained same not considering which party in power.

Arm supply: China has emerged as a major supplier of arms to the Bangladesh Armed Forces. In 2006, China supplied 65 artillery guns and 114 missiles and related systems (The Assam Tribune, October 9, 2007).  Most of the tanks (T-59, T-62, T-69, and T-79), a large number of armored personnel carriers (APCs), artillery pieces and small arms and personal weapons in the Bangladesh Army are of Chinese origin [2]. There are plans to acquire 155mm PLZ-45/Type-88 (including transfer of technology) and 122mm Type-96 as well MBRLs from China by 2011 (defence.pk/forum, March 19, 2009).Since 2010, Beijing has supplied Dhaka with five maritime patrol vessels, two corvettes, 44 tanks, and 16 fighter jets, as well as surface-to-air and anti-ship missiles, according to Stockholm International Peace Research Institute.[2]

The tension of regional security issue: Firstly, there are fears among the Indian military establishment that Dhaka may grant military basing rights to China, thus complicating India’s security in the Northeast. This could result in the monitoring of Indian military movements, particularly of the Indian Army that is deployed in the region. There are several strategic Indian Air Force bases such as Bagdogra (with MiG-21 fighter jet deployed), Hashimara (with MiG-27 fighter jet deployed), and Tezpur (with Su-30 fighter jet deployed). These bases and military aircraft could easily come under a Bangladesh-China electronic and radar surveillance network during a crisis or impending hostilities.

Second, there are concerns that Bangladesh may offer Chittagong port for development to China, ostensibly for commercial purposes, but which could also be used for staging Chinese naval assets. This is to be expected and can be reasonably tied to the Chinese development of Gwadar port in Pakistan and Hambantota port in Sri Lanka. Third, China will be able to monitor Indian missile testing conducted at Chandipur-at-sea near Balasore, Orissa, and also naval activity in the Andaman and Nicobar Islands in the Bay of Bengal.

Bangladesh is to seek Chinese help to build deep sea port. It would cost billions of dollars, if a Chinese company were to be awarded the contract, Sonadia would become the fourth port to be constructed by a Chinese firm in the Bay of Bengal

China and Bangladesh are developing road links between Kunming to Chittagong, via Myanmar which called the Chittagong-Kunming Road and Railway Link, could be a boon for Bangladeshi infrastructure and trade. It would also provide a cheaper alternative than is presently available for shipping goods between China and its western neighbors.

Chinese accumulated aid to Bangladesh reached 1 billion US dollars at the end of 2013. Six friendship bridges in Bangladesh have been built, and the Seventh is under way. Many other mega infrastructure projects are under construction with Chinese fund and technical support.

No development could be achieved without sound security situation. Both China and Bangladesh are victims of terrorism and extremism, and should strengthen exchanges and cooperation between the militaries and law enforcement departments to safeguard respective national security and stability and promote peace and stability in the region.

China laid out a red carpet welcome for Ms. Hasina — on her third visit here. Both leaders pledged to step up financial assistance and involvement in infrastructure projects in Bangladesh, Chinese Premier said that Bangladesh would be “an active partner” in a “China-led Asian century,” Prime Minister Sheikh Hasina has underlined her willingness to deepen her country’s strategic and economic engagement with China, signing major agreements for the construction of roads ,railway lines and power plants on a three-day visit to the Chinese capital.
Five deals signed: The two countries this week signed five deals, including for Chinese assistance for the construction of a power plant in Patuakhali and building a multi-lane road tunnel under the Karnaphuli river. The two sides are yet to reach an agreement on the Sonadia port project,Mr. Xi described Bangladesh as an important country along the “maritime silk road” project that he has been championing, which envisages deepening connectivity, building ports and free trade zones, and boosting trade with littoral countries in the Indian Ocean region and in Southeast Asia..

The last 14thOctober, 2016, Chinese President visited Bangladesh. Chinese President Xi Jinping’s visit to Bangladesh is likely to be a landmark one owing to a number of factors. After three decades, a Chinese President is visiting Bangladesh, signifying growing importance of the country in South Asia’s economics and geo-politics, reported by ‘the Daily Star’.[3]27 deals on co-operation in a number of sectors, 15 agreements and MoUs (Memorendum of Undestanding) and 12 loan and mutual agreement were signed on this visit. China will fund $21.5 billion in 28 development projects and foreign aid, $80.3 million on economic and technical co-operation, $700 million on load agreement for Karnaphuli tunnel construction and $280 million on credit agreement for Dashekandi Sewerage Treatment Plan Project.[4] Actually Bangladesh-China relations are being diversified with various projects and agendas from past to present, fundamental of which is trade and others come to front with different strategic importance either for Bangladesh or for China. However, loan is not better for any development because it undermines the economy when it becomes more than affordable. Although Bangladesh has signed a huge number of loan agreements, needs to keep in mind that we need aid but loan burden may exploit our quality and strength for further development.

After discussing assessing the Bangladesh-China relations we can realize that both China and Bangladesh wants each other for their won national interest. As China is a growing economic giant Bangladesh needs her because she is also a developing country. On the other hand, China needs Bangladesh for their market and geopolitical strategy.