This is a million dollar question that who are going to be the next president of United States?? We see how both candidates are trying to show their charisma to secure votes but who will be the last winner?? Hillary Clinton or Donald Trump???

8th November 2016, 58th US presidential election date. Excitement is on the top level all over the world as it’s the most powerful country of the world. Excitement grows as its Hillary Clinton for the first time as a women contesting in political history of United States. On the other hand Mr. Donald Trump has expressed himself a very peculiar with his highly controversial speech. Both of them passed a long run of primary selection and faced spear of attack from each other. But who will be the last smile?? Let’s try to have some points! 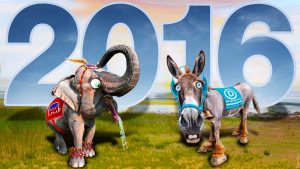 First we see the background of both candidates. Hillary Rodham Clinton, the democratic nominee is lawyer, teacher, public speaker; women right activist has a long political experience. Her prominent background is working as secretary of the state (2009-2013), she as senator (2001-2009). On the other hand, the republican nominee Donald John Trump is businessman, television program producer and writer. It can be said that comparing these background Hillary could be better than Trump for American voters. read why Hillary Clinton is favorite to me!

The second one could be clear vision of agenda. If we evaluate both sides’ agenda we will get why and how Hillary is more perfect. First of all we can select economic agenda. You may know that most of the voters of the US presidential election from middle class society. Hillary emphasized to satisfy them. To do this, she possessed three planes:

To shape first those agenda she pointed out very specific ideas like cutting tax for middle classes and small business; Investments held between one and two years would be taxed at the maximum income-tax rate of 39.6%.  Assets held for longer would be taxed on a sliding scale, such as 36% for those held 2-3 years, 32% for those held three to four years, and 20% (the current rate) for those held for six years or more, establishing infrastructural bank, reducing student debt and guaranteeing funds etc. she proposed to pay 35 billion$ for college affordability plane, to raise 16.6 billion IDEA fund for disabled children. She proposed minimum wage should be 15$ per day. She identified specific problems and proposed for solutions for energy sector, carbon reduction, education, health sectors etc.

On the other hand, Donald Trump’s slogan in economic agenda is “making America great again”. He also shaped very specific tax model named “5 part tax plane”. His some other addenda are such:

Ok! If we evaluate his agenda, we may find that his tax model is really innovative and it’s lower than current tax rate. He also proposed to cut waste more than 500$. But there are some ambiguity such he proposed to cut military cost when he stated to bomb ISIS and send more troops to Syria. Besides, his vision to NAFTA is not realistic and it could make more hindrance in trade and business.

Third, we can evaluate foreign policy and plane to counter terrorism. Though most of the voters have no headache on foreign policy but conscious voters have enthusiasm to it. And it’s clear that terrorism is the biggest fear for US citizens after 9/11 attack. Let’s see what Hillary or Trump said on this issue. Hillary Clinton preferred a liberal and multilateral appearance on foreign policy and international relations. She claimed that she had restored US leadership during the era of working secretary of the state what was ruined in Bush’s era. She targeted promoting essential partnership Middle East, Asia and Europe while standing US strong superpower. Clinton insisted “democracy and development” should be the keyword to solve global problems. Hilary has very modest policy to Middle East along with Iran. Her policy is improving intelligence quality rather than expensing on troops. But she carefully assessed nuclear proliferation program. She would like to continue current relation with allies but her obstacle is most of the world leaders are misogynist yet. Besides, Question still remained that she persuaded Barak Obama to invade in Middle East.

On the other hand Trump is little bit rightist and sometime aggressive or dictatorial. He would like to review current relation with allies. He is more hawkish than Hillary in Middle East invasion. Rather he is aggressive to Mexico, Japan, China and North Korea and highly irreversible to immigrant and migrants. In this position, it could be on favor of him or against him. If he can satisfy voters that flow of migrant could harm security and it is essential for national interest he can take advantage but if fails to do this he will have to lose votes of immigrants who got citizenship of US.

Now let’s see a different perspective!! That is their personality and scandals!! We have enjoyed two presidential debates and have heard various kinds of scandals through media! In this motion Trump is loser for his controversial and embarrassing speech against women. He also degraded his personality by speaking like a joker. Barak Obama said “presidency is not a reality show” could be real as Trump may do wrong mixing shallow gesture with political personality. It could make serious harm to his election on 8th November. Already he has been knocked down for sexual scandal. At this critical monument Republican chairman has given up support from Trump. Video of what Michille Obama said about Trump’s sexual behavior to women

And Hillary must take the chance. She is using her opposition’s weakness. His moderate personality, debating skills, smart attitude is attracting voters. In most of the survey is in favor of her. But she has a dark side also. She couldn’t hide her “email scandal”.

Looking back to 2012 presidential election, Barak Obama was seemed to down as Mitt Romney defeated him on public debate. Most of the survey was saying that Mitt could be the final winner, but what happened!! What was the miracle?? No it’s no miracle at all. Ronmey ruined himself throwing terrifying speeches on abortion and immigration. At the very moment game changed!

In 2016 if we evaluate the situation, we may find some crucial change that “rightist wind” is blowing through international politics. BREXIT result in UK could be a message. So, you can’t say Hillary is going to be winner unanimously!! But if you think in a normal approach Hillary is the next president of United States.