The most polarized election of the world on the stage!  You must be able guess apparently that I’m talking about US presidential election where a lady is an actor. Yes! I’m talking about Hillary Clinton, have already wined in primary veteran candidate Bernie Sanders.

It would be a record in 140 years US history if she finally wins the race! She not only a Politian but a rewarded singer, humane right worker, teacher also. When she was first lady in white house, secret guard names her codename as “Evergreen”. Really! 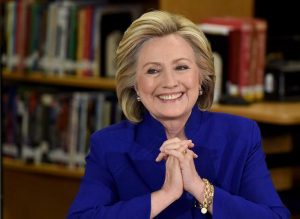 “Everyday American needs a champion and I’m the one!” as she has a long struggle for presidency for eight years she proves her attitude. Moreover, in some case she has clear and modest vision than republican candidate Donald Trump.

In 1960, fifty five years ago, the first women took the power as state leader in the history. Sri Lankan President Srimavo Bandaranaike. Since, we got a number of women in power in Argentin( Isabel Martínez de Perón ),  Banfgladesh (Sheikh Hasina),  Germany (Angela  Merkel)  Denmark (Hele Thaening), Nepal  ( Bidya Vandari),  Croatia (Kalinda Gravar Kitirokiv) et al. But the perspective is more different as US is supposed to be a dominant actor in today’s international system. Thus, the big question is, is Hillary fit for the presidency of US? To answer this it could be a good answer that the lady has already experience as Secretary of the State; she must have ideas of ins and outs of the global politics.

People like me obviously choose Hillary as a better choice as another option is republican candidate Donald Trump. There is lots of difference in their policies. Why my choice is to Hillary?? Let’s see.

As a non American people we first have to look over her foreign policies. We know that foreign policy is to determine state’s own national interest, we see Hillary’s policy is much more flexible than Trump. He already has declared to reject Muslims if he wins. Thought to be more hawkish and interventionist than Obama, strong support for Israel, she endorsed Obama’s nuclear deal with Iran. She voted in favor of the Iraq war in 2002, which she now says she regrets.

Then we can pick migrant issue. Her strategy is to keep comprehensive reform, keep pathway to citizenship, keep families together and enable millions of workers to come out of the shadows. As senator she also contributed in Comprehensive Immigration Reform Act in 2006 and 2007, co-sponsored DREAM act 2003, 2005. and 2007 to give undocumented students who grew up in the U.S. a chance to contribute to our nation’s growth. Her present political agenda is to establish national Office of Immigrant Affairs to ensure successful immigrant and refugee integration in every community.

In today’s climate issue US is one of the largest carbon reducer. So, we must eager to know what policies next president going to be implemented. She already promised to reduce 30% green house gas emission. Set national planes to have 500 million solar panels. “I won’t let anyone take us backward, deny our economy the benefits of harnessing a clean energy future, or force our children to endure the catastrophe that would result from unchecked climate change.”  She said.

Above all, the most attractive feature of her personality is amicable. In her political career she has a good record of having positive attitude as one of her quotes we can see “when president Obama asked me to serve, I agreed to do so, I was for the very same reason. He asked and I accepted because we both love the country. That’s how we do in America” she stated in 2015.

Dear friend! You may find different views to choose her as she has peculiar character to catch your attention! She is a singer! A jolly teacher! A lawyer! What not! So time will say what will be the next!

4 Replies to “Why Hilary is favorite to me !”