Democracy, a compound of two Greek words namely “Demos” meaning “people” and “Kratos” meaning “rule”, stands for the government of public. It is said to be a ‘government of the people, for the people, by the people’. More plainly, it is to suggest that the real power, termed by Thomas Hobbes as “sovereignty”, lies in the hands of common people in a democratic system. It is indeed a matter of deep interest that the only true application of democracy was the political system of ancient Greece. The ideal form of democracy was implemented and enjoyed exclusively by the people of ancient Athens. Being a small city—that we call ‘city state’ today—Athens had a very small population, limiting to a few thousand free souls. It was, therefore, easy enough for them to officiate democracy in its ideal form. There were several hundred elected members of the parliament serving different offices of the government for a fixed tenure. Hence, every free citizen of Athens had an equal opportunity to contest and get elected.

The future of democracy in Pakistan as a political system is insecure. The Western model of democracy is neither a choice nor redemption of the people of Pakistan. The political history of Pakistan has portrayed a completely negative picture of democracy and that is why our layman has always invoked and appreciated a military regime. Of course, desiring military regime is a tragic situation in a modern state, but this is what we have been up to throughout 60 years of independence. However, critically speaking, it is relatively an acceptable state of affairs while still being so young a country. West took many hundred years to arrive at the stage of current political stability and maturated judicial traditions. History witnesses that West has warred for centuries and has always cut one another’s throats. However, after Renaissance, their effort to unify a whole warring continent and the subsequent contribution in the making of scientific civilization is extremely appreciable. It was this realization that paid them off. Nonetheless, today, it has reversed in what we call the only ideological state of the world, Pakistan. 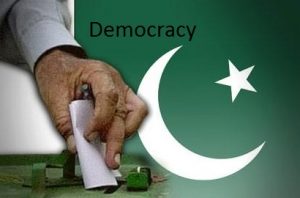 The rule in Pakistan is “the richer, the better”, whereas the political system is still stuck in the “divide and rule” formula. The power of purse always stands as a decisive factor in the area of underdeveloped countries’ politics. Accordingly, even if you are polled only 30% of the total cast votes, but you stand above the rest of the candidates in number, you win the constituency. Thus, one representing only 30% of the adult population turns out to be the legitimate emissary of the whole public. This is, so to speak, our model of democracy as gifted by the West.

Read is the world heading towards World War III?

Pakistan being an extremely important geopolitical country is but a ‘necessary evil’ for the US and allies in their present strategic position. Americans have huge interests in the region above Afghanistan. The optimal augury for guaranteeing the sole superpower’s interests is an individual-based democracy in Pakistan—diminutively “one man show”. They have always empowered individuals—acting against their own dedication to democracy—in our country rather than strengthening institutions. They are aware of the fact that strong institutions in Pakistan-like underdeveloped countries will shatter their dream of global dominance and secure future energy resources. We must admit that the US policymakers have been pretty successful in the delineation of ‘New World Order’, as they have manifestly changed the mindset of a whole East with a particular reference to Pakistan. Of course, the people of Pakistan vote for individuals, and not for ideologies and/or systems. They have no interest in the change of system, nor do they bother for the ideological destination of Pakistan.

Slogans like “we want democracy” are raised by those unfortunate folks who are entirely crippled to understand democracy. In fact, they get killed for nothing, as they are geared and eventually duped by tricky politicians.

A psycho-analysis of the people in East, especially those living in Pakistan, is a crucial call of time. It has been observed that the democracy of West is not a psychological match for the mind of East, provided that this mind accommodates a radically different set of behaviors.

The most primary mistake in this regard was the selection of the parliamentary system of government for Pakistan on the British pattern. It has been no less than a deadlock for all over the history. The exposure to Martial Law has been one of the weakest aspects of the vulnerable parliamentary system. The plethora of parties comes into being when the parliamentary system is the game-court. Given the vulnerability, this system bears a number of fallacies and inevitable evils such as horse trading, king-making, and a critical role of the presidency. However, a better solution within the bounds of democracy is the presidential form of government. It may have its own sophistications, but it is still a better working system befitting the power-governed people of Pakistan. The four Martial Laws and other authoritarian regimes have divulged the fundamental defect of Pakistani subjects that they obey authority. Similarly, we cannot bypass our ideology working behind the creation of the country that “There is no god but Allah” when formulating a political system for the country. Should we make a blend of presidential system and Caliphate, this will be the ‘archetype’ of democracy for the East. In a point of fact, Caliphate being a resemblance to the presidential system is doubly democratic in the traditional sense of the word. The soul of democracy is the obligation of being answerable to some authority. In the Western form, the elects are answerable to the voters. Nevertheless, Islamic Caliphate admits being answerable to God and masses simultaneously. This certainly canvasses the conscience as well as an appearance of every elect.