We proudly declare that we are the citizens of the twenty-first century. With the unprecedented high growth rates, development, the democratization of nations, one might ask, what is there not to be proud of? This view of today’s times paints a very rosy picture compared to what really is going on in the world. Yes, I agree, a decade or two ago, the twenty-first century could’ve been idealized as the pinnacle of success for the world as a whole. But what has happened in the past few years has uprooted any faith one could have in the hope for a peaceful and developed world. The world today is lost in the absolute chaos. Everywhere you turn, you will find instances of such atrocities that this only leads to one question- how long before the peaceful façade breaks? have we forgotten the tragedy of Hiroshima and Nagasaki?

The world economy is plunging. Even a superpower like the USA has not been spared. Growth in the unemployment rates all over the world has led to a mad scramble. Recently, Greece’s economy crashed. They plunged into total depression and financial crisis.

You see everything not only has an equal and opposite reaction but, also sets off a chain reaction. With the increase in unemployment all over the world, people have started migrating to countries like the USA, UK, Australia, France, Germany, etc. But this has created a sense of insecurity among the citizens of these nations, hence, there has been a very high rise in racial attacks in these countries. Attacks of these kinds become the basis of violence on a higher and increasing level. This has created tensions between different countries as nations try to manage and stop migrants into their countries. See, one instance like the falling world economy sets off a chain of instances which have led to something much more dangerous.

Global terrorism is at peak today. There are horrifying instances of terrorism all over the world. The unexpectedly fast and what seems to be an unstoppable rise of entities like ISIS have wreaked havoc with the lives of people. I would like to point out that ISIS symbolizes, in every way, where the world went wrong. Countries were too occupied with self-centered interests to see that such an organization was establishing its firm base over particular regions. They only took notice when it started to threaten their power and their interests, but, by then ISIS had grown into a destructive force which cannot be stopped. The same can be said for the Syrian Crisis, which has been going on for so many years, but was taken notice of just a few years back, that too only because it threatened the powerful countries now. Today, the nations of the world scramble to find a solution for these crises. They pledge to restore the dignity of the people who are bearing the brunt of these conflicts and to restore peace to these areas. But, even though they declare this on moral grounds, the truth is that here too, the selfish interests of these countries. Their powerful stature is being threatened, they are facing huge refugee crisis, and thus, they decide to take action. 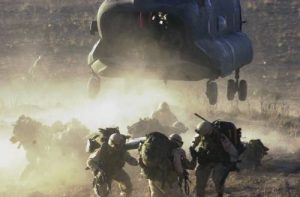 The rise in inter-nation conflicts too is an unnerving aspect leading to the global crisis. The open conflict between Russia and Ukraine is an example. Another example is the continuous and frequent standoffs between India and Pakistan. The most troubling fact about these instances is the indifferent attitude of the world towards these issues. Other nations may interfere by saying a word or two, but they refuse to be a bigger part of these issues, all for the protection of their own interests.

What is even more troublesome is the fact that there is a terrifying rise in the intra-nation conflicts. Today the USA, which has always prided itself for its peaceful society is seeing increasing outbursts of violence against specific communities which in turn is leading to an escalation of friction between the different communities there. In India, militant outfits like Indian Mujahideen, Maoists, Naxalites, etc. are gaining the foothold and are increasing their violent attacks. Also, India has seen an increase in communalism, with the tolerance level of every community diminishing with every passing second.

Add to all these scenarios, the mindless, merciless and ruthless killing of innocent people all over the world. An example of this is the Peshawar School Massacre which took place on 16 December 2014, in which seven gunmen attacked a school in Peshawar (in Pakistan), killing 145 people out of which 132 were school children between the ages of eight to eighteen.

My point is, that no, the world is not in a good place right now. The picture is not rosy at all. When will nations start looking beyond themselves and actually realize that something needs to be done, without bringing in their selfish interests, before it’s too late? Otherwise, are they ready to bear the consequences? Stop and think, for a moment even, what will happen if nothing’s done? How long before the world tips off the edge? How long before we see another World War?