Permanent Court of Arbitration has stated a verdict on South China Sea over China-Philippine dispute. Its favors Philippine’s claim that China has no legal rights to dominant 86 per cent of the area within “nine-dash” line but china boycotted.

In 1986, US vs. Nicaragua case are another example of powerful countries of practicing disobeying of international law, when US interpreted Nicaragua’s harbor. When International Court of justice verdict that US violated customary international law, US didn’t appear before ICJ at merit stage and refused claiming that it has inherent right of collective defense. Finally US used UN Security Council in favor of her.

On the other hand, there are some positive examples of honoring International law. Bangladesh-India sea dispute is prominent one. In 2009 Bangladesh lodged a case against India. After five years of legal procedure, PCJ awarded a verdict saluting Bangladesh’s claim over 200 nautical miles of Exclusive Economic Zone. Previously, International tribunal for the Law of the Sea (ITLOS) dismissed another dispute between Bangladesh –Myanmar. 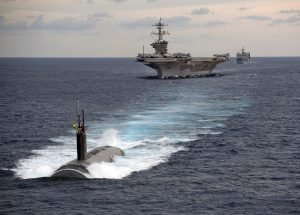 South China Sea is a marginal area of Pacific Ocean encompassing Karamita and Malacca straights. Its main importance remains before geopolitical factors. It covers about 50 per cent of total world business pathway mockery over unlimited mineral resources. It is said that is conserves 7billion barrels of oil and 900 trillion of natural gas. The regional countries China, Japan, Indonesia, Vietnam, the Philippines, Taiwan, Malaysia and Brunei all have competing claims.

china claims that it was under china in hung dynasty and Chiang ki Shek  ruled up to nine dash line. It issued a map showing that Paracel and Spartly Island were its integral part in 1947. So, China claims so far and large number of territory from its province of Hainan. Tension raised on top when China built artificial island in 2015.

Vietnam also says that historically this area was ruled by it and ruled over both Spartly and Paracel during 17th centuries and claims that China had no role before 1940.

Philippines claims on the basis of geographical proximity. Malaysia, Brunei claims that it covers within their Exclusive Economic Zone.

To the consequence, United States has been related on the issue. Whole scenario became a warlike situation when they confronted. It seems positive when Philippine appealed to PCA. The PCA awarded according to international law recently. But China’s reaction has frustrated the community.

The convention for the law of the sea 1982 is a result of struggle of developing countries from 1973 to 1982 to establish their rights. There are very particular solutions of such problems. But self interested world politics are decreasing the utility.

Renowned writer on International relations Samuel P Huntington said in his famous book “The Clash of Civilizations and The Remarking World Order” that ocean could be the apple of discord of third World War. We, the peace loving global community don’t want to see it to happen.

One Reply to “South China Sea: distortion between International law and Geopolitics”