South China Sea has been the “apple of discord” between the US and China in international affairs for decades. Not only US-China rivalry but also regional countries have been motivated to involve in the territory as it’s one of the lucrative territories in both geopolitical and strategic dynamics. People who are interested in international affairs and geopolitics must stay with the news over the South China Sea. Now, it has become a global issue even small countries are involving vis-à-vis position. Philippine already has gone to the Permanent Court of Arbitration against China and the court verdict in favor of its claim. Thus, it is said that the South China Sea could be the battleground of World War III. To understand the statement we have to have a particular knowledge of the issue and have to look at the geopolitical and strategic importance of the South China Sea.

The geographical location of the South China Sea:

The South China Sea is a marginal sea of the Pacific Ocean having an area of 3,500,000 square kilometers situated on the south of China; east of Vietnam and Cambodia; northern-east of Malaysia; west of Philippine and up to the Strait of Malacca. The South China Sea is collectively an archipelago of thousands of corals, reefs, and small islands. Major rivers that flow into the South China Sea are Mekong, Red, Pearl, Min, Jiulong, Rajang, Pahang, Pasig, etc. the islands situated in the area are Spratly Island, Paracel island, Prata’s island, Scarborough island, Macclesfield island etc. 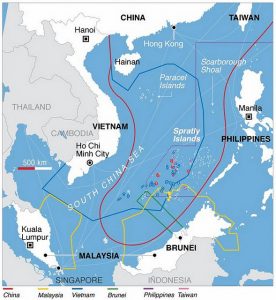 Geopolitical location is the most crucial importance of the South China Sea. To categorize the geopolitical context, we can identify these points-

In today’s world, energy consumption is one of the most geopolitical dynamics in international relations. Developing countries need to secure their energy supply to continue their growth and developed countries can’t think a moment without redundant energy. So, oil and gas are very important. Let’s see oil and natural gas consumption. It’s estimated that the South China Sea reserves 7 billion barrels of oil, 900 trillion cubic meters of natural gas. The Zhujiang river basin, Signage Sea basin, Bieber Gulf basin, Zengmu basin contain an average four oil generation layer systems and 0.5 to 5 billion oil reserves. There are some other valuable materials like Ilmenite, Monazite, Zircon, Cassiterite, Arenaceous quartz, etc. these are very important raw materials for industries. The South China Sea is rich in salt also. The annual output of salt is estimated at 604,000 tons.

Another importance of the South China Sea is that it is the one-third trade passage of global maritime passage. It is the link between the Pacific Ocean and the Indian Ocean. Malacca Strait is the cheap sea passage of the Persian Gulf. Thus it became important for the US, China, Japan, the Korean Peninsula, and East Asian countries. For example, 60% of Japan and 80% of China’s oil imports from the Middle East.

Seafood is also a crucial cause of the importance of the South China Sea. The South China Sea covers 12% of global fish products. China, the Philippines, Vietnam, etc produce a huge number of fisheries resources. 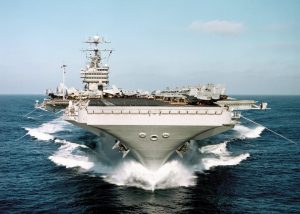 While geopolitics indicates geographical relations with politics, there is another importance which is strategic. The power politics, military interests created the South China Sea more important. Today’s world is the US-led where China is a rising giant economically and politically. The US must have to keep an eye on the South China Sea to check China. Besides, the South China Sea is the route of US military supply to the Middle East.

If we evaluate US interest in the South China Sea, we can identify two specific subjects here. First, US access to trade and military purposes, and second is to check Chinese hegemony. When South China Sea covers 5.3 trillion $ shipped through it, 1.2 trillion $ of this of US. With 700 billion GDP and a population of 525 million, South East Asia is the 5th largest trading partner of the US.

Besides, US has several joint military bases in this area. It is said that the US has more than 60 military bases in Japan; about 40 in South Korea and it has several treaties with India, the Philippines, and some other countries. That’s why the US keeps a cautious eye on this. In October 2015 US warship passed within 12 nautical miles of China.

On the other hand, China claims 90% of areas of the South China Sea. By de facto, it controls a large portion of the areas. It is the 2nd oil consumer of the world after the US but it has to import half of the demand. The political strategy of China on the South China Sea is to maintain its status quo over there. Because China already has a dispute with Japan over the Paracel & Spratly Islands. And China knows properly that western powers are considering “China Threat” after the cold war since 1990. In addition, Taiwan is another headache for China. Thus China is having a dominating image with neighbors and made a surface-to-air defense system. In 2013 it started to build artificial islands in the South China Sea.

The concept of an Exclusive Economic Zone could be another clash between China and its neighbors. By the UN Convention on the Law of the Sea (UNCLOS) country has control over 200 nautical miles as EEZ. It becomes problematic when the baseline is accounted from reef and rocks.

Another neighbor Australia is also not immune from the South China Sea conflict. The Labor Govt. also announced to display defense force to conduct freedom of navigation.

Association of Southeast Asian Nations (ASEAN) tried to have a multilateral dialogue in Vientiane, Laos. 10 members along with the United States, China, and six other nations: Russia, India, Japan, South Korea, Australia, and New Zealand expressed the importance of peace and stability in the South China Sea.

The famous geopolitical theorist Alfred T. Mahan once theorize that to control world power state has to have control over the sea. Though air defense and ballistic missile system questioned the theory, the importance of the sea didn’t decrease its importance. Cheap business pathway, huge consumption of oil, mineral resources, and the blue economy are the crucial dynamics of geopolitics and strategy. That’s why South China is important in geopolitics and strategy.