Since power politics emerged in global politics, the geographical strategy became the vital point. Thus, the term “Geopolitics” has become a buzzword in world politics. There are certain elements in geopolitics variable or non-variable. On both sides, Bangladesh is important in the context of geopolitics. One needs to understand those relevant geopolitical contexts to play good diplomacy on the stage of world politics. Geography is the key element of geopolitics. Napoleon Bonaparte said that

“the foreign policy of a country is determined by its geography”

Geography is a common reality in geopolitics.  The geographical location of Bangladesh is an important matter in the various contexts of geopolitics all over the world. In the concept of ‘Nodality” or geopolitical center, Bangladesh could be considered in high vitality as its position on the “geopolitical frontier” of the Indian subcontinent.

Though Bangladesh is a small country in the context of the area it is the 10th most populated country all over the world. it’s not a curse but a boon in the present situation if it could be properly organized. The population of Bangladesh could be the manpower if education, technical vocational training, gender equality are facilitated. 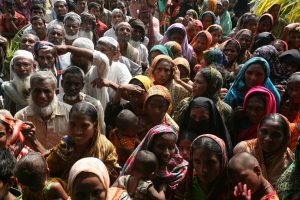 Russia has already expressed its interest to establish banking relations with Bangladesh in a sideline meeting of ASEM. Besides, Dhaka is situated in such a geographical location where the distance of the border is not more than 200 miles. Thus, connectivity with another country is very easy. So, it could be an “integrated market”.

The juncture of the regional connectivity:

Bangladesh could be tri-juncture of the region. We know that one-third of the world’s population is living in this area. To the west of Bangladesh is India and West Asia, to East is East Asia and ASEAN countries and China is very near. Even, the eastern part of China can easily be connected to the ocean via this region instead of passing a lengthier path via western China. At the same time, Bangladesh is situated on the “Apex Center” of the Bay of Bengal. In this circumstance, only Bangladesh can use the direct sea route of the Indian sea. Without passing Bangladesh’s sea territory, the sea route of the Bay of Bengal can’t pass. It’s a crucial point in the geopolitical context.

Bay of Bengal and sea territory:

Renowned geopolitical scholar Alfred Mahan theorized that the sea is a very crucial fact in geopolitics. To dominate the world one must have control over the sea. Similarly, the Bay of Bengal is a fact in geopolitics over time not only for commercial value but also for the security purposes of a major power. Recently, in January of 2016 US pacific naval commander, Scot H Swift has visited Bangladesh for a joint program with Bangladesh Navy and he stated the importance of the Bay of Bengal in his book about the visit. On the other hand, China is also interested in here. In 2014 China wanted to take part to construct a deep seaport in Sonadia. In a celebration of the relation of 40 year’s Chinese ambassadors also expressed their interest in this context. You may know that Bangladesh is importing submarines from China.

In modern geopolitical context, historical legacy is also considered because in today’s world exchange is not only for goods but also for culture, ideas and discernments. Bangladesh is 2nd largest Muslim majority country. Additionally, the cultural intensity and similarity of nations are a good sign of geopolitics.

These two projects could be the sweeping importance of geopolitical context of Bangladesh. These projects were coined in 1958 in order of connects the capitals of the Asian countries. These projects are implementing under supervision of ESCCAP (Economic and Social Commission for Asia and the Pacific).

It’s aimed to make nets of 11 highways. two of the highways are going through Bangladesh. It could be connected to Europe directly. If it complete Dhaka to Delhi and Kunming could be the distance of 5 hours and 8 hours respectively. but there should be some alteration couse be alteration as the design is such that Bangladesh has to connect to China over Myanmar which areas are highly vulnerable.

Regional geopolitics: at the trio of India Pakistan and China

In the South Asian context, Bangladesh is situated in such a volatile point where for three nuclear power India, Pakistan, and China – Bangladesh is important along with Bhutan and Nepal which are landlocked. So, Bangladesh is also a fact in regional geopolitics. Though Bangladesh is a small neighbor of India, it must have to consider Bangladesh to secure her northeastern states known as “seven sisters”. There are a number of separatist groups that are active in those states. Besides, India needs to take transit over Bangladesh to facilitate trade and business with them. But India wasn’t aware of the issue first. New Delhi seemed her neighbor as “small neighbor”.

India-Pakistan historical conflict is a fact in the geopolitical context of Bangladesh. When India allied with the US, Pakistan showed ties with China. Nepal has shown a yellow signal already. Meanwhile, China took the chance. Beijing aimed to spread her influence as far as from the South China Sea to the Indian Ocean. She already established her part in Gwadar port of Pakistan in cooperation with Pakistan and Iran. Beijing constructed a deep seaport in Hambanton of Sri Lanka. To Chinese policy of “string of pearls” Bangladesh is important. In 2002 when China started the business of 1000 million dollars whit Bangladesh, now it is up to 5 billion dollars.  On the other hand, India’s aspiration of being regional super they are using Andaman and Nicobar for their maritime base. But it’s not so far from Bangladesh.

The Shiliguri corridor is a permanent headache for India. It’s very sensitive real estate for India because it’s the only small land to connect the northeastern states of India. Any internal of an external actor can harm this area. So, Bangladesh is a security issue for India. However, India has realized the fact and concentrated to Bangladesh not as a “big brother” but as a cooperation partner.