A Greek Nobel laureate once wrote, “Wherever I go, Greece hurts me”.  Frankly, I must admit that I often have that same feeling as Yiorgos Seferis used to and I have been judging Greece’s mistakes over the centuries. Nonetheless, it is also true that as Greeks we have been proud of our country and we do believe in giving better opportunities for the future. What we have not done is to learn from the past and to move with those specific lessons to the present and the future. The way we have been acting now in the present is a consequence of the past 2 years and so which have determined our everyday life.

read Japan’s Upcoming General Election: All You Need To Know

Our Odyssey begins in January the 25th 2015 a cold and ordinary Sunday that meant to be unforgettable. The “left” wing SYRIZA party was the winner of January’s snap general elections, securing 149 seats out of 300 while its predecessor New Democracy, the typical conservative party, won just 76, its worst outcome since its founding in 1974. SYRIZA managed to win those elections with a classic populist message of “coming to hope” and with naivety about the real conditions that we have been in since 2010. In 2010, 2 years after the beginning of the financial crisis, Greece officially announced its incompetence of repaying public debt, leading to economic assistance by the IMF and European Institutions, like European Central Bank and European Commission, with the first bail-out program.

What we have seen since May 2, 2010, was clearly an economic and social chaos. Strict austerity measures were implemented, welfare system collapsed, unemployment rose above 20% and we have lost about 25% of our GDP from around $220bn in 2009 to $180bn in 2015. Those policies led to the quite famous term “personification” describing the huge defeat of center wing social democratic parties from governing to destructing. PASOK, a party in government for more than 20 years with a center wing economic and social approach, won 43% of popular vote in 2009 while the same party in 2015 general elections won about 7.5% of the vote. So, dissatisfied or outraged people decided to vote for leftists, the successors of the old and traditional PASOK, who were promising to put an end to memoranda and gain national sovereignty back.

Memorandum has come to people’s consciousness as tragedy and the reason why they have been suffering all these years. But what does memorandum mean in real terms? When a country defaults, as happened in Greece in 2010, then the only way to avoid bankruptcy is via bail-out program. This program expresses a loan that a financial institution provides to a country to repay its current bonds, but at the same time, a country under this program also has the obligation to fulfill some fiscal rules to have full capacity in the future to repay that loan. All these obligations are what we call memorandum and we are obliged to follow them if we want to take from times to times specific installments, essential to cover liabilities.

As it is shown below in the chart, the two leading European economies own about a third of Greek debt and its vast majority derives from EU bail-out programs. On the contrary, IMF who has been described as a cruel negotiator and the notorious supporter of fiscal consolidation owns less than 10% of Greek debt. So how possible is just one institution, IMF, to prevail over 3 others, EC ECB and ESM, while it is just a third wheel? 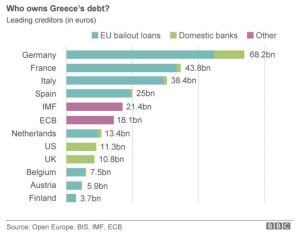 Thus, Alexis Tsipras, Prime Minister since 2015 once said in his speech “Go back Mrs. Merkel, go back Mr. Shäuble”. This saying of Tsipras describes the honest approach of ordinary Greeks over the German elite, who have been the main representative of memorandums and consequently people’s despair. Saint Francis of Assisi wrote in a pray of his “where is despair, may we bring hope” and apparently that was the aim of SYRIZA’s governmental decisions. The aim always differs from the result. Nonetheless, they started negotiations immediately and Mr. Tsipras appointed Minister of Finance an ally of him and a prestigious economist, Yianis Varoufakis.

Varoufakis can be described as bright, well-educated, ambitious and an arrogant daydreamer. He tried with all these 5 traits of his personality to negotiate Greek debt and its obligations to the creditors or Troika. In a documentary, before becoming a minister, he said that when you a have a mortgage of 100thousand euros then you have no power, but if you have loans above 300bn euros then you have all power needed to negotiate. That was his feeling, but his European counterparts had a different view over the alternatives the Greek economy might have and they supported a doctrine of consolidation of both deficits and debts.

We had no alternative. European institutions and the IMF had the final saying in decision making and it was predetermined that austerity was our top priority and prosperity of numbers was more important than the prosperity of people. But, both Tsipras and Varoufakis believed that they were able to change all these that the foundations of the liberal order of the 60-year-old EU could possibly transform to massive solidarity to the less powerful. From January 2015 until June the same year, they put academic theories and dreams before actions and they just wished that something could change. Unfortunately, in the real world wishes never come true, but what did come true was capital controls in our banking system.

They delayed closing a deal with the Troika and that led to the incremental removal of deposits and lower trust in the economy. So, in June the ECB formally implemented capital controls in Greek banks to avoid the huge loss of capital due to uncertainty over banking system’s reliability. The Greek government had also acknowledged its intention to call a referendum, over the Juncker bail-out program and to let people decide if they wanted to reject or approve this program.

Once again turmoil prevails over harmony and people started acting irrationally, thinking that the world was about to be destroyed. During capital controls, which have not ended yet, each depositor had the opportunity to remove 60euros per day and 120euros in the weekend. It doesn’t matter whether pensioners had these amounts of money in their accounts they were just nagging publicly about the inconvenience waiting in queues just to take 20 or 40 euros.

In July the 5th, the Greeks once again went to the polls to vote for a referendum this time. As Nobel laureate Joseph Stiglitz had stated: “Neither alternative-approval or rejection of the troika’s terms will be easy, and both carry huge risks”.  In the end of his article in “The Guardian”, Stiglitz made himself quite clear about rejecting this program and aiming to “shape a future that, though perhaps not as prosperous as the past, is far more hopeful than the unconscionable torture of the present”. At the time of the referendum, I wasn’t eligible to vote, but whenever I was asked what I would vote for, I simply replied “Yes”.

I was strict and confident about this decision of mine and I used to tell that either way, once we remain in the EU and the Eurozone there is no answer to ending austerity. If it wasn’t the Juncker program, there would be others with different names which in the end we should have accepted.

The Greek people, desperate and disappointed of what they have seen since 2010, voted with a percentage of 62% in favor of rejecting this program. At the same time, Varoufakis resigns his post; his successor is his deputy, a former economics professor Euclid Tsakalotos.

Mr. Tsakalotos, compared to Varoufakis is much surer about what he says and thinks, he knows that Greece cannot negotiate much and with quite moderate actions he tries to do the unthinkable, of overcoming his theoretical ideas so as to act as a Minister. He has been described as a “Marxist” economist, but he was unable to see any kind of prosperity outside the Union, so he had no option but to accept consolidation. I must admit that I can’t see that either. A few days later, the powerful “NO” of the Greeks, simply became “Yes” having accepted a new bail-out, the third one to be precise.

That, third bail-out was in a way the beginning of the ending. Around one-third of SYRIZA’s MPs left the party, creating their own parliamentary group, many cabinet members resigned and unity belonged to the past. Also, I have to mention, that opposition parties were headless and nobody was able to give a message of leading the country into the path of prosperity.

Taking advantage of this situation, Mr. Tsipras, having signed formally the third memorandum called for early elections in the end of September. Their promotion of hope turned into the absurd rhetoric question of choosing Prime Minister because the constant question of GREXIT by the opposition faded away. He managed to be re-elected as Prime Minister with minor losses parliamentary but with unprecedented losses for Greece and social democracy.

Hence, we returned after September’s elections in the exact position where we started in January. In the next two years, the economic debate was unnecessary and social problems became the first priority with a tendency in modernization transforming a country devoted to the past into a member state of the future. Once again, the brightness of some people, for instance, the former Minister of education, was eliminated by the strength of the church and conservatism.

Can we have a better future? The answer here has many aspects considering the way someone views politics and economics. For example, many politicians and journalists allege that in 2018, the time of memoranda comes to an end and after that, we will be able to stand on our feet. Others think that this promise is completely irrational due to the deals that we have already agreed and we have to change everything now once and for all exiting the EU. Both answers have benefits and drawbacks, but they are wrong because the question I have stated is wrong and subjective.

I quite often argue with my elder sister, a political scientist, that the turning point of discussion is someone’s view over the European Union. The way they see better future depends heavily, from my point of view, in the EU remaining question. Frankly, I am social democratic, Keynesian economist and a supporter of a reformed hopefully EU and I “feel” that prosperity comes with cooperation. What we have seen for more than 7 years is Greeks sacrificing almost everything and gaining too little. The days of the crisis, are now behind us and there are certainly many things that they can promise to us.

read Racism Vs Globalization: a Matter of concern

For many years we have been heavily depended on others strengths and we weighted our weaknesses through them. Sometimes, you have to pay for those liabilities and that time came in 2010 for Greece. We should be optimistic about what comes next after those years of crisis and recession we have to reassure ourselves that we are not coming back to the same position where we started.

Yes, we have an enormous debt compared to our GDP and yes we have many more things to do. Alas, is what I often say considering the future but if we are able to move from past doctrines into reformation then I will be delighted to admit that I was wrong. Only, time can show to us what is right and what is wrong and I personally hope, that time is our ally.