Many days ago people don’t know what gender study is. When it added in academic field as discipline, people realized to find actual concept. But it was not easy to re- build long time practiced concept. Practical scenario was complicated. On 18 September 1893, the governor of Lord Glasgow, New Zealand codified new electoral act enabling all adult women to vote for the first time in history, they paved their way to leadership!

Embracing untold suffrage women are marching toward leadership. You may know medieval story. Situations have changed. But acute fact what you have to realize that having cover picture in magazine, naked performance in Television not meaning women are getting ahead. The formidable change is women’s contributions in leadership. They are contributing in politics, social work, climate change research, technology, entrepreneurship etc. It’s the true sign of better world. Out of these, political movement could be more eye-catching. You must be imaging the face of Hillary Clinton, Angela Merkel, Irina Bokova et al.

To study women engagement in politics, we could remember Frances Perkins, first US cabinet member. She graduated with Masters from Columbia University. Though she graduated in Chemistry and Physics she didn’t work in traditional way. With a great legacy she passed her political leadership.

Another pioneer woman in politics is Margaret Grace Bonafield, the labor politician, women rights activist is the first cabinet member in British parliament. Her early life was full of struggle and her life is equipped with “First” in party, parliament and government spheres.

Most famous worldwide name may be is Margaret Thatcher. The “Iron Lady” was longest served prime minister and first state-woman in British parliament. Her early life was also full of throne. She proved her dignity being state-woman from grocer’s daughter. Interestingly Margaret was also a scientist. She completed her bachelor degree in Chemistry from University of Oxford. 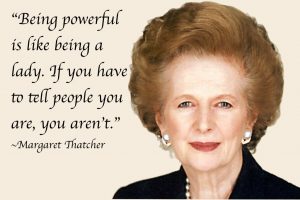 Angela Merkel could be signified as not only state-women of Germany but also a leader in European community. She has been selected as most famous women in several times by renowned Magazine. She has a great influence in European Union as she is one of the architects of the Union.

Hillary Clinton could be the golden feather in women empowerment if she can win the race in next presidential election 2016. Nonetheless she has served as secretary of the state and managed democrat’s unity very smoothly. Her personality, political standing has already captured world’s attention.

Theresa May has just taken the helm of UK when it’s moving towards critical situation. She has already served as home minister of the country.

Indira Gandhi, a politician in different perspective, first female Prime Minister in India. Though she was hereditary politician as her father was state-man but it the scenario was complex at the time. Her political legacy is famous for her diplomatic charisma in international politics.

Chandrika Bandarnaike Kumaratunga is a Sri Lankan politician served as fifth president of Sri Lanka for decades. She is the only woman President of the country till now. During her time she conciliated civil conflict of ethnic parties and developed economic system as well. She was a pioneer advocate to promote multicultural stability in society.

Benazir Vutto is 11th and 13th Prime minister of Pakistan. She was the first Female Prime Minister not only in Pakistan but also in total Islamic countries. Her concrete political standing in domestic politics gave her special celebration as “Iron Lady”. She assassinated in 27 December 2007.

Megawati Sukarnoputri is 5th president of Indonesia who has served from 2001 to 2004. Though she has faced derogated economic condition and terror attack in Indonesia she tackled it.

Khaleda Zia, first female Prime Minister in Bangladesh has served for two periods. Though has little experience in politics she showed her leadership in the movement against autocratic movement.

Sheikh Hasina, The present Prime Minister of similar country has legacy of women empowerment. She has achieved UN environmental award 2013. Facing unfortunate tragedy in 1975 she didn’t give up her altruistic service to the nation.

Aung San Suu Kyi is Nobel laureate and political leader of Myanmar.  She has sacrificed her life for democracy. After a long way of struggle she has started her political dream in Myanmar having room in cabinet for the first time.

Ellen Jhonson Sirleaf is 24th and current president of Liberia. She has won Nobel Prize in 2011 for non violating movement for women empowerment of peace-building activity. Previously she has served as finance minister and present chair of West African Economic Community.

Mame Madior Boye is former Prime Minister of Senegal. She has a great contribution of strengthening health service, education in Senegal.

It’s a short picture of their achievement. Though they are upholding voice, situation from local level is not same. They are facing numerous obstacles in political participation. There proven leadership is not considered everywhere equally.