After assassination of 9 Myanmar police by unknown armed killer Myanmar started brutal raid again on Rohingya people. There are various report over there we have seen how brutally they are being treated. On this raid more than 69 Rohingya have been killed by Myanmar Army and millions of Rohingya are leaving their home to rescue their lives. What we have seen in media it is completely genocide by Myanmar govt.

Previously we have written on Rohingya history. Today we would like to discuss some crucial point that you should realize as you are concern of human right.

The question of originality:

When international civil society is requesting the Suu Kyi govt to stop brutality on Rohingya she refuses answering that they are origin of Bangladesh. Thoug there are evidence that Rohingya are origin of Arakan but can genocide legal for immigrant or settler?

In the 1948 Universal declaration on Human Rights genocide is completely rejected and it is punishable whether it is done by a person or a state. But what we are seeing on Rohingya people? Are they enjoying any single right declared by 1948 Universal declaration on Human Rights? In addition we are seeing what kind of brutality can be made in present civilized time! They don’t have security of life, don’t have right of move freely, don’t have right to marry, don’t have citizenship; even they don’t enjoy any right of migrant! May be they are not considered as human being!

Myanamr present rulling party leader Suu Kyi, a well known politician and Nobel laureate in Peace. She was famous for democratic movement. But her position on Rohingya frustrated international community. Even her speech was so horrible that we can’t imagine any Nobel laureate have done it ever! Millions of people are now demanding to take back her Nobel Prize. Not only could that but also she be on trial being accused of activity against human right.

On the other hand, silence of international human right organization and UN’s useless action is more frustrating. It is not adequate just thronging a speech or a note to save human right. But we see UN just completed its responsibility doing that. Though a Commission has been made under leadership of Kofi Annan but it had no implementation power. And it’s a unsustainable step except preventing genocide inviting Bangladesh to shelter Rohingy.

Bangladesh is also an over populated country though is sheltered Rohingya several times. Bangladesh is not a signatory of 1951 Convention on the status of Refugee. She is not bound to take refugee but she is respectful to article 14 of Universal Declaration of Human Rights. About 3 million Rohingya are already over there. Previously, Bangladesh didn’t get adequate fund to migrant & refugee rehabilitation. Myanmar didn’t take them back.

Question of religion or humanity: 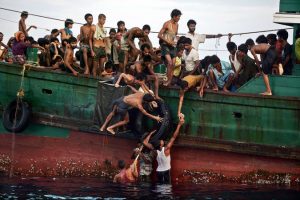 Rohingya are Muslim in religion. Myanmar is Buddhist major country. Though it is stereotyping with religion rather it is question of humanity. No religion supports genocide. Any single person whoever he or she in religion can’t be silent in such situation. Myanmar may claim it as internal matter but international morality can’t be silent in such violation of human rights. Suu Kyi claimed that Rohingya are leaving their home with their own will. It is not acceptable when the genocide come to media as day light.

Bangladesh foreign minister recently has met the diplomat to speak about Rohingya issue. Bangladesh did it frequently but Myanmar didn’t responded. Bangladesh invited Myanmar very mannered diplomatic way several times but Myanmar refused. Now Bangladesh should raise it to UNGA to take steps. New elected UNSG should be part of history taking measures on such situation.